About 50 million years ago, the fast-moving Indo-Australian plate crashed into the Eurasian plate, giving rise to the Indian peninsula, and beginning a process of faulting and folding that ultimately formed our present day Himalaya Mountains. This process continues today, with the Himalayas still rising about 5 mm per year. The region is very variable, with tremendous glaciers and snowfields at high elevations, and forests and grasslands at lower elevations. 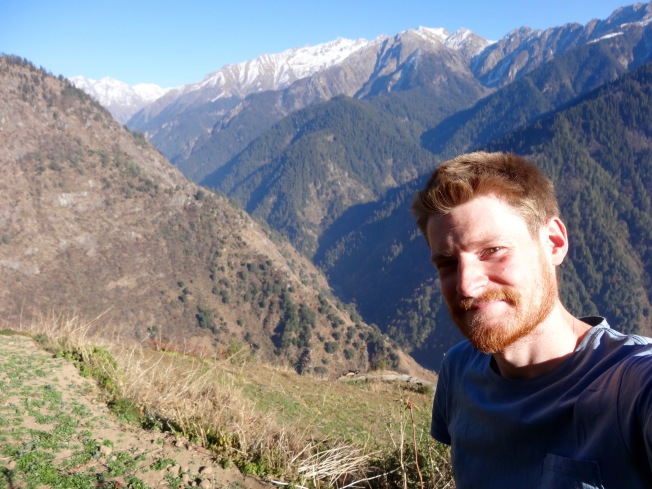 The lead Author, Paul Elsen, stands in front of the Tirthan Valley.  The highest peaks range up to 4900 meters.

The variation in elevation, climate and soils make the Himalyan region in northern India a mecca of biological diversity, hosting over 10,000 identified plant species and about 1000 bird species. As in most of India, human population growth is putting enormous pressure on the forested regions, partly as a source of wood for heating and cooking, which has led to extensive deforestation. In concert, substantial forested areas are being converted to farms or pastures to feed the growing population. Paul Elsen and his colleagues wanted to know how these transformations of forests to cropland and pastures were affecting bird population across the region. They were particularly interested in how birds survived the winter, a period of climatic stress and food scarcity, when many of the birds descend from their high elevation breeding grounds to lower elevations that are nearer to human populations.

Chestnut-headed Tesia, an altitudinal migrant found in high elevation forests in summer, and in forests and agricultural lands in winter. Credit: Prashant Negi.

The researchers set up three transects across four different landscapes (total of 12 transects), representing four levels of disturbance. The undisturbed landscape was primary forest in the Great Himalayan National Park. A second disturbance type – low intensity – retained a mixture of community forest used for timber and fuel, and also included some small agricultural plots. A third disturbance type – medium intensity – had small wooded areas, but was dominated by mixed agriculture including orchards and a variety of crops such as grains, beans and garlic. The final disturbance type – high intensity – was used as pasture, had mostly grasses and very few trees or crops. 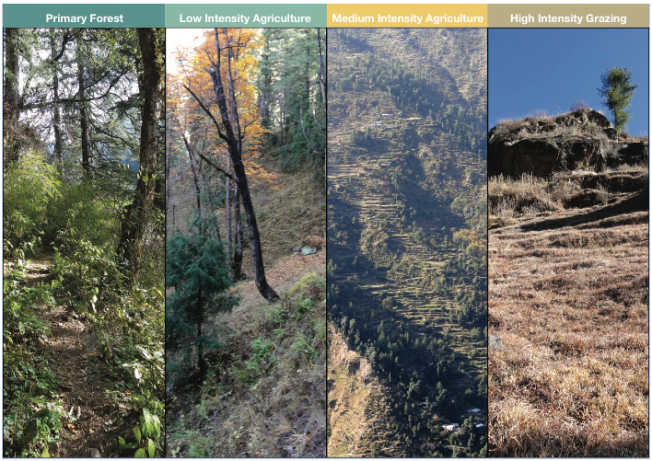 The basic research protocol was literally a walk in the woods. Elsen walked (slowly) along the same trail in each transect three times during the winter season, and identified and counted all of the birds. Other researchers identified, measured and counted the plants growing along the transects.

Elsen was stunned by what his team discovered. Before beginning this study, he had spent about a year in the Himalayas within intact forests doing other PhD-related research. His travels into surrounding villages showed significant bird activity, but he assumed these birds were primarily species associated with humans or more open habitats. He expected decreasing bird diversity and abundance with increasing agricultural intensification, where the bird communities in intact primary forest would be teeming with species in high densities, and the areas with mixed agriculture and intensively grazed pastures would have just a few species. The data below paint a contrasting picture. 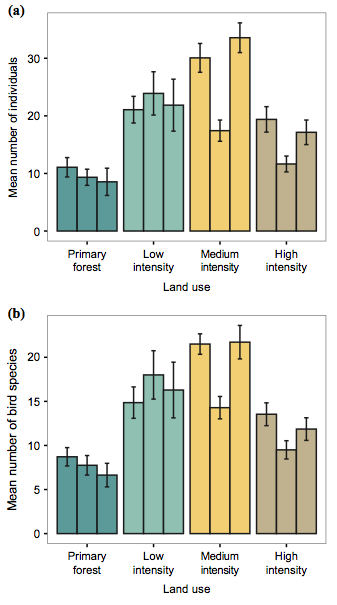 Mean and standard error of (a) bird abundance and (b) number of bird species per site across the four land-use types.

Primary forest hosted the fewest number of birds and the fewest species of birds. Among the three disturbance levels, low- and medium-intensity had greater abundance and diversity than did the high-intensity disturbed sites. At least in the winter, low- and medium-intensity disturbed landscapes can be beneficial to bird populations. Elsen suggests that birds are attracted to the tremendous amount of food available in the agricultural lands, such as fruiting trees and shrubs, even in winter. Some birds can consume these fruits, while other birds consume the yummy energy-rich insects that are attracted to the fruit. There are also plenty of seeds available for granivorous birds. But high-intensity disturbed landscapes lack these benefits, leading to fewer forest-adapted bird species, which are replaced by open-country or generalist bird species. 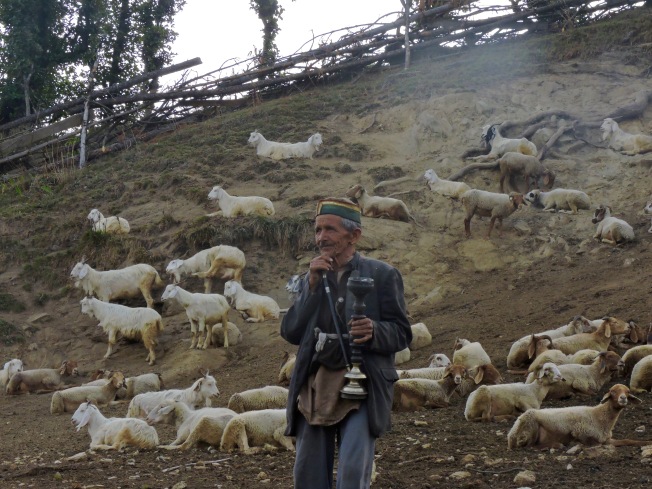 Pastoralist and his goats in a high-intensity disturbed site. Credit: Prashant Nagi.

The researchers caution that we still don’t know have a clear picture of how birds use different landscapes during the breeding season, although preliminary data indicate that more species are unique to primary forests during breeding season than in winter, and that fewer species inhabit intensively grazed pastures during breeding season than in winter. Consequently, Elsen and his colleagues recommend a holistic conservation approach, which recognizes the importance of conserving large portions of intact primary forest, while at the same time preserving landscapes with low- and medium-intensity agriculture.