In human society, a guild is an association of craftsmen or merchants that work together to achieve a common goal. For example, 14thcentury Paris boasted over 350 different guilds, including drapiers (cloth makers), knife-makers, locksmiths, helmet-makers and harness-polishers. Ecological guilds are similar to human guilds, in that members of the same guild depend on the same resources for survival. But members of the same ecological guild are  different species, each of which uses a similar resource, or group of resources.  As we shall now discover, as in human guilds, members of ecological guilds don’t always get along very well.

A guild is part of a food web, which is a summary of the feeding relationships within a community.  Israel Leinbach, Kevin McCluney and John Sabo were interested in one particular part of a food web – the relationship between a large wolf spider (Hogna antelucana), a small wolf spider (Pardosa species) and a cricket (Gryllus alogus).  Both spiders are in the same guild, because they obtain their energy from similar sources – insect prey.  This cricket specializes on willow and cottonwood leaves that fall to the ground in the semi-arid floodplain of the San Pedro River in southeast Arizona. Under natural conditions, the researchers observed the large spiders eating both the small spiders and crickets.  However, they never observed the small spider eating the relatively large cricket (which averages 20 times its mass), though small spiders are delighted to eat many other (smaller) insect species.

The researchers argue that even though guild members specialize on similar resources, it is important to consider how other resources might influence the relationships among the species.  During the dry season, water is a critical limiting resource.  As it turns out, large spiders, crickets and small spiders are very different in how much energy and water they contain. From the table below you can see that the small Pardosa spiders are very low in water content, but pack a huge amount of energy into their tiny bodies.  Crickets of both sexes have a high water content, but contain a relatively small amount of energy in their large bodies. Thus small spiders have a much higher energy/water ratio than crickets or large spiders.

Interactions among the three species when water is limiting (Control – left) and abundant (Experimental – right).  Black arrows are direct effects, while gray arrows show the direction of energy flux).

Leinbach and his colleagues set up a mesocosm experiment using 2 X 2 X 2 meter cages in which they experimentally manipulated community composition and water availability.

All cages, except controls, received either one large male or female spider, two small spiders (sex unknown) and two crickets (again either male or female). Controls received no large spiders, and were used to establish a baseline survival rate for the two potential prey items (small spiders and crickets). To test for the effects of water availability on predation by large spiders the researchers placed water pillows that held approximately 30 ml of water into half of the enclosures. They predicted that large spiders would primarily eat energy-rich small spiders in cages with water pillows, but prefer water-rich crickets in cages without water pillows. The water pillows had minimal impact on cricket water levels as they got plenty of water from their food (green water-rich leaves)

Leinbach and his colleagues used per capita interaction strength as their quantitative measure of predation effects.  If prey survival was lower in the experimental cages than  in the control, there was a negative interaction strength – indicating that large spiders were eating a particular prey type.  When the researchers provided them with water, large spiders of both sexes ate significantly more small spiders than they did  without water supplements.

But the story was very different with crickets.  The researchers expected that when supplemented with water, large spiders would bypass the water-rich crickets in favor of the energy-rich small spiders. Surprisingly, instead of crickets in cages with pillows surviving as well as controls, they actually survived better – at least male crickets did. One possible explanation is that spiders may emit odor (or other types of) cues that affect cricket behavior in a negative way, for example by causing them to feed more cautiously and inefficiently. Once the large spiders have killed the small spiders, there may be fewer spiders around to smell up the place, and crickets may feed more efficiently, and thus survive better. 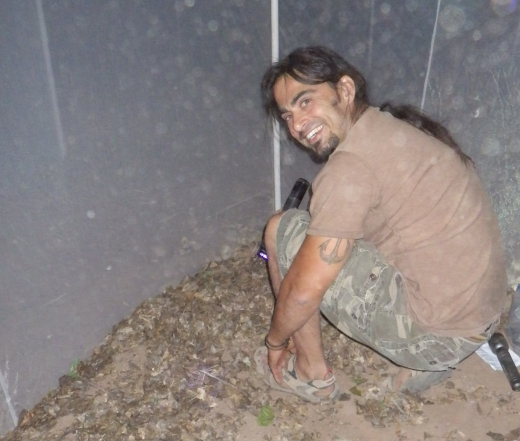 Israel Leinbach searches for spiders and crickets within a cage. Credit Kevin McCluney.

I asked Kevin McCluney if there were any other surprising findings, and he pointed out that large male and female spiders showed very similar consumption patterns.  He expected that females would need more energy because egg production is very energy demanding.  One explanation for this lack of difference is that large male spiders may expend considerable energy wandering around in search of sexually receptive females, and their overall energy needs may be similar to those of females. Balancing the demands of energy, water and sex may be equally demanding for both sexes of large spiders, and may lead to adaptive feeding on different levels of the food chain as environmental conditions shift.

note: the paper that describes this research is from the journal Ecology. The reference is Leinbach, I.,  McCluney, K. E., and Sabo, J. L. 2019. Predator water balance alters intraguild predation in a streamside food web. Ecology 100(4):e02635. 10.1002/ecy.2635. Thanks to the Ecological Society of America for allowing me to use figures from the paper. Copyright © 2019 by the Ecological Society of America. All rights reserved.

One important feature of a biological invasion is that invaders can change an entire ecosystem in a substantial way.  A possible outcome of this change is that, in theory, an invasive species could inadvertently make an ecosystem less suitable as a habitat for itself.  Does this happen, and if so, under what circumstances?  One reason invasive species are so successful is that they usually can increase in population size very quickly.  Ecologists have discovered that species with the potential to increase very quickly may also have the potential to decline equally rapidly and then increase again, going through repeated boom-bust cycles of population size.  Thus if an invasive species starts to decline, it does not always mean that this decline will continue over time. Consequently, monitoring a biological invasion for only a few years may give a misleading picture of long-term prognosis for the invasive species and the ecosystem.

Eric Larson was able to address these problems when he began his postdoctoral research with David Lodge at the University of Notre Dame in 2014. Lodge (and John Magnuson before him) has studied the rusty crayfish (Faxonius rusticus) invasion in 17 northern Wisconsin lakes since the 1970s, using the same bait (beef liver) and the same traps on the same days each year.

Crysta Gantz prepares to bait a trap with beef liver, which the crayfish love, but she – not so much! Credit: Eric R. Larson.

Three graduate students (the other co-authors of the paper) had continued data collection and done extensive mapping of the lake bottoms.  When Larson joined the research program he had about 40 years of data and 17 well-described lakes.  He knew that rusty crayfish were declining in some lakes and not others, and he and his colleagues were ready to explore whether these declines could be tied in to some environmental variable that the crayfish were influencing in some lakes, but not others.

As an avid fisherman (more in my mind than in actuality), I have, on many occasions, caught a nice bass only to have it regurgitate the contents of its stomach, which usually includes bits of crayfish.  As it turns out, predacious fish such as bass love to eat crayfish, and crayfish are more likely to survive in environments that provide hiding places such as rocks or luxurious macroalgae that grow in sand or muck. The problem is that crayfish enjoy dining on macroalgae, so they can do themselves a disservice by eating their shelter from predators, effectively changing their environment so that their invasion is no longer sustainable.  Does this actually happen?

Larson and his colleagues continued collecting data on 17 lakes, and used their long-term data set to evaluate whether rusty crayfish populations were not declining (steady or increasing), declining or occupying an ambiguous gray zone where there was no clear trend in how the population was changing. The analysis showed that three lakes were not declining since the rusty crayfish invasion, eight lakes had declined substantially and six lakes were ambiguous.

The researchers turned their attention to the lake-bottom substrate.  Were rusty crayfish more successful in rocky bottom lakes that gave them continuous predator protection?  Their analysis indicated that the three lakes where the invasion was going strong had the rockiest substrate, while the eight lakes experiencing population declines after the rust crayfish invasion were significantly less rocky.

Proportion rocky substrate in lakes whose rusty crayfish populations are in decline (red), have an ambiguous trend (black) or are not in decline (blue). The horizontal line within each box is the median value, box bottom and top are 25th and 75th percentile, and whiskers are the 10th and 90th percentile. Non-overlapping letters above the bars (a and b) indicate significant differences between the groups.

The researchers conclude that in the absence of rocky substrate, the rusty crayfish is eating the aquatic macrophytes that grow from the sandy lake bottom, thereby exposing itself to predators.  Larson and his colleagues recommend simultaneous surveys of crayfish populations and density of aquatic macrophytes to see whether lakes may oscillate between states dominated by one or the other.

Researchers want to know how commonly invasive species modify habitat in a self-destructive way.  A literature review of invasive species declines failed to find much evidence, but there are not enough long-term data sets to get a sense of how frequently this occurs. The problem is that researchers need to monitor the invasive species population and the relevant habitat variables for an extended time period.  The jury is still out on this question and only time (and careful data collection) will tell.