Back in my working days, people that I met would sometimes ask me what I did for my research. I usually told them that I studied spider sex, which, while true, was a bit misleading, as my interests were actually slightly broader. But studying spider sex was a good fit for my disposition, because, more than anybody I know, I can stare at something for a very long time and not get bored. And when spiders have sex, there can be very long periods, when, to our eyes, nothing is going on. As it turns out there is a great deal of pheromonal communication going on, and considerable vibrational activity as well, but it is not that easy for humans (even abnormally patient ones) to detect.

A spider and her three egg cases within a web she has built in a Taphrina blister. Credit Matt Barbour

The point is that I have a very soft spot in my heart for spiders, and was delighted to learn about an indirect process that provided a comfortable home for needy spiders. Heather Slinn got interested in her project while an undergraduate summer intern. Her colleague, Matt Barbour, pointed out that when he flipped over blistered black cottonwood leaves (Populus trichocarpa) he often found a spider hanging out in there. This observation led to her to study the relationship between cottonwood trees, cottonwood genetics, pathogens that make leaf blisters and spider occupancy rates.

Taphrina fungi form cup-like blisters in the leaves of Populous trees. But these trees vary in how susceptible they are to leaf blisters. The researchers wanted to answer three questions about this relationship. First, do spiders prefer to live in leaf-blisters as opposed to unblistered leaves? Second, are differences in tree susceptibility to Taphrina a result of genetic differences between the trees? And third can differences in Taphrina-resistance account for differences in spider density?

One of the keys to the experiment was establishing a garden with distinct clones of trees of known genetic makeup (genotypes). Slinn and her colleagues studied five different genotypes, with approximately 40 trees per genotype. They dutifully watered them throughout the summer, and then sampled up to 30 leaves from each tree for blister density, blister size, and spider residency, using a modified shop vac to suck up all of the spiders.

But there were pronounced differences among the five genotypes in blister density, blister size, spider density and the probability that a spider was occupying a blister. Graph A shows that genotypes 1 and 3 (G1 and G3) had the lowest mean density of blisters (about 2 or 3 per meter of plant), while G4 averaged about 20 blisters per meter. Although G3 had relatively few blisters, it did boast the largest blisters (see graph B). The researchers concluded that blister density and size were both under genetic control, but not linked to each other. 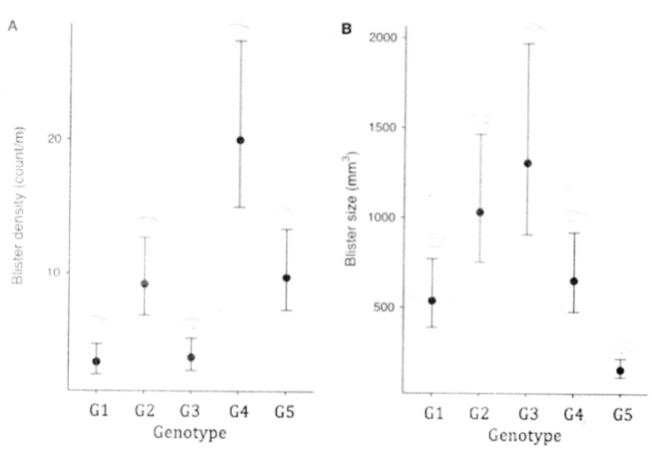 Mean (A) blister density (number per meter of plant) and (B) blister size, for the five tree genotypes.

But how did blister density and size influence spider residency? G4, the genotype with the greatest number of blisters per plant, also had the greatest number of spiders (graph C). But on a per blister basis, we can see that the two genotypes with the largest blisters (G2 and G3 – see graph B) also had the highest probability of housing a spider in their blisters (graph D). So when spiders make decisions about where to live, both size and number are important.

It is unclear why the spiders are attracted to blisters.  Some spider species have been shown to be attracted to structural complexity, because that provides more or better attachment points for web strands and egg cases.  Depressed blisters may also give protection from abiotic factors such as wind and precipitation.

Like most good studies, this research raises a host of related questions. Why is there so much genetic variation in Taphrina-resistance within this tree species? Slinn suggests that there may be tradeoff whereby investment into Taphrina-resistance might compromise a plant’s ability to invest in other functions such as cold-resistance, or rapid growth and/or high reproductive rates. A second question is how does spider presence influence other species – for example does hosting a spider reduce the number of herbivorous insects that might attack the tree? A third issue raised by the authors is that plants infected with Taphrina may be weaker and more susceptible to herbivores. In that case, the spiders may be present in blisters because they are attracted to the herbivores that are eating the leaves. And finally, herbivores eating the leaves may transmit other diseases affecting our forests, such as dutch elm disease, chestnut blight and white pine blister rust. Unraveling this complex chain of events will keep researchers busy for many years.

note: the paper that describes this research is from the journal Ecology. The reference is Slinn, H. L., Barbour, M. A., Crawford, K. M., Rodriguez‐Cabal, M. A., & Crutsinger, G. M. (2016). Genetic variation in resistance to leaf fungus indirectly affects spider density. Ecology 98(3): 875-881. Thanks to the Ecological Society of America for allowing me to use figures from the paper. Copyright © 2017 by the Ecological Society of America. All rights reserved.

One thought on “Cottonwood genes and spider hostels”