Most of us are accustomed to thinking about sexual dimorphism in animals.  Male lions have manes, and male deer have antlers and generally larger bodies than female deer.  In many species, male birds have more complex sings and more colorful plumage. Perhaps less familiar is that female insects are generally larger than males of the same species.  But many of us are unaware that sexual dimorphism exists in some plant species as well.

As a child, Kaoru Tsuji spent considerable time watching insects on plants.  Later, as an undergraduate at Kyoto University in Japan, she noticed that larvae of a particular geometrid moth only visited male Eurya japonica plants, but not females. This led to her graduate work on how plant sexes affect herbivorous insects, and later, more broadly, on how plant sexual dimorphism affects other species in the community. 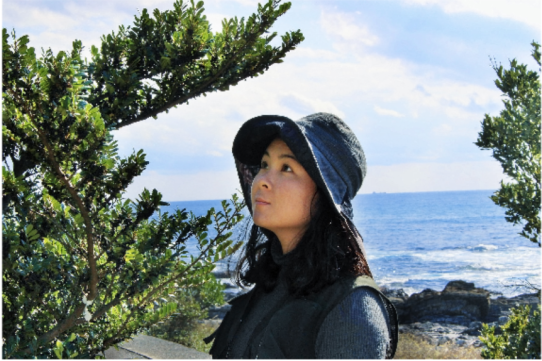 At the 2014 Ecological Society of America meetings, Tsuji heard Tadashi Fukami talk about microbial communities in flower nectar, and realized that she could learn to apply Fukami’s techniques to the microbial communities living within Eurya flowers.  After working three months in Tadashi’s lab, Tsuji was now ready to explore whether two plant species, Eurya japonica and Eurya emarginata, host different communities of bacteria and fungi in the flowers of male and female plants.

Male and female flowers of the two study species visited by pollinators.  These photos are not to scale; in actuality the male flower is substantially larger.  You can get a sense of this by noting that the same insect pollinator, the fly Stomorhina obsoleta, is pictured in figure a and near the top left of figure b.

For both species, male flowers tend to be larger, while female flowers tend to have sweeter nectar. Higher sugar levels will increase the chemical stress experienced by microbial organisms living in the nectar. Because the inside of a microbial cell has a lower sugar concentration (and thus a higher water concentration) than the sugar rich nectar environment, water tends to leave the microbial cell, leading to severe dehydration. Thus Tsuji and Fukami expected to find lower microbial abundance in female flower nectar.

Complicating this situation, animal visitors, such as bees and flies, also influence the microbial community in at least two ways.  First, many nectar-colonizing microbes depend on animals to disperse them to new flowers. Second, the interaction of nectar production, water evaporation and consumption by bees and flies can change the concentration of sugar in the nectar.  If there are few (or no) animals drinking the nectar, water will evaporate, sugar will remain, and the nectar will become more and more concentrated (sweeter) as more nectar is secreted over time.  But if nectar gets consumed, the new secretions will simply replace the old nectar, and sugar levels should be relatively constant. Thus flowers without animal visitors should impose more chemical stress on microorganisms by virtue of being sweeter.

The researchers sampled nectar from 1736 flowers, and grew the nectar microbes on agar plates supplied with nutrients that would support either bacterial or fungal growth.  In addition, the researchers also placed small-mesh bags over a subset of these flowers (before they opened), to reduce animal visitation.  After five days they counted the number of colonies formed, to estimate microbial abundance. Unfortunately, microbes were rarely found in E. japonica, so most of the data are for E. emarginata flowers only. 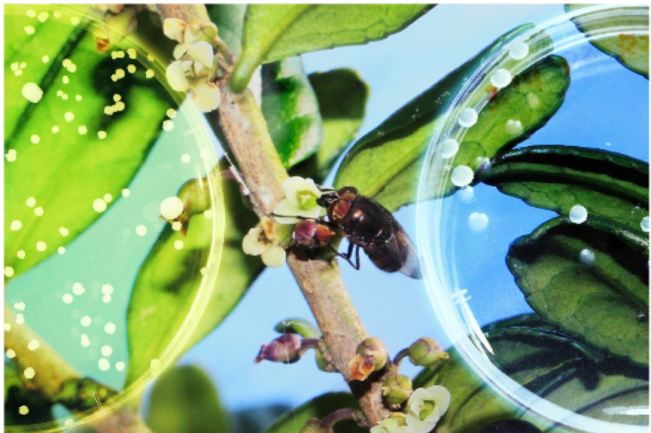 First, as expected, female flowers had higher nectar sugar levels than did male flowers (the Brix value measures sucrose concentration).  In addition, putting a fine mesh bag over the buds substantially increased sugar levels in nectar from flowers of both sexes. 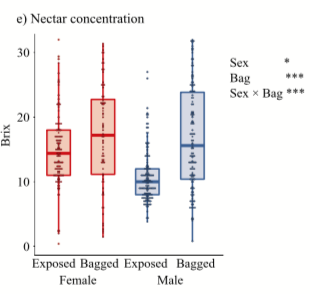 Sucrose (Brix) concentration of exposed and bagged E. emarginata flowers of both sexes.  For box plots, the dark horizontal bar is the median value, while the box encloses the 25th and 75th percentile.

The proportion of flowers in which fungi and bacteria were detected was much greater in male flowers than in female flowers.  In male flowers only, bagging the flowers decreased fungal frequency but not bacteria frequency. 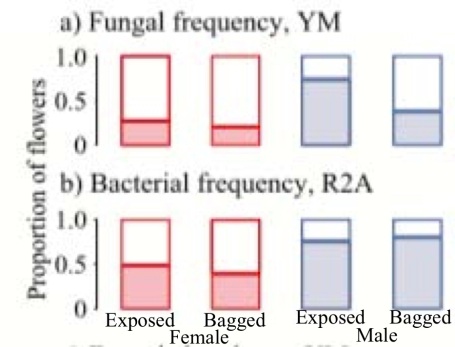 The researchers used colony forming units (CFUs) – the number of viable colonies on the agar plate – as their measure of bacterial abundance.

Abundance of fungi (top) and bacteria (bottom) cultured in agar plates, that were swabbed with nectar derived from exposed and bagged E. emarginata flowers of both sexes. Note that the y-axis is log10 CFUs, so an increase from 3 to 4 (for example) is actually a tenfold increase in number of CFUs.

Why did bacterial abundance increase when flowers were bagged?  The researchers hypothesize that reduced fungal dispersal from bagging caused competitive release of bacteria from the fungi.  Presumably the fungi and bacteria compete for essential resources (such as amino acids) in the nectar.  Because the bags reduce fungal abundance, there are fewer fungi to out-compete the bacteria, leading to an increase in bacterial abundance.

The researchers used DNA analysis to characterize which microbial species were found in female vs. male flowers.  They discovered major differences in species composition between the sexes.  Taken together with the data on frequency and abundance, it is clear that sexual dimorphism in these plants influences microbial communities in significant ways.  Tsuji and Fukami suggest that sexual dimorphism in many species may have profound community-wide consequences that researchers are only beginning to understand and uncover.

note: the paper that describes this research is from the journal Ecology. The reference is Tsuji, K. and Fukami, T. (2018), Community‐wide consequences of sexual dimorphism: evidence from nectar microbes in dioecious plants. Ecology, 99: 2476-2484. doi:10.1002/ecy.2494. Thanks to the Ecological Society of America for allowing me to use figures from the paper. Copyright © 2018 by the Ecological Society of America. All rights reserved.

Coral reefs have amazing species diversity, which depends, in part, on a mutualism between the coral animal and a group of symbiotic algae that live inside the coral. The algae provide the coral host with approximately 90% of the energy it needs (from photosynthetic product).  In return, the algae are rewarded with a place to live and a generous allotment of nitrogen (mostly fecal matter) from the coral.  Unfortunately, coral are under attack from a variety of sources. Most problematic, humans are releasing massive amounts of carbon dioxide into the atmosphere, which is increasing ocean temperatures and also making the ocean more acidic.  Both processes can kill coral by causing coral to eject their symbiotic algae, making it impossible for the coral to get enough nutrients.

But other factors threaten coral ecosystems as well. For example, the reefs of Mo’orea , French Polynesia (pictured above), were attacked by the voracious seastar, Acanthaster planci, between 2006-2010, which reduced the coral cover (the % of the ocean floor that is covered with coral when viewed from above) from 45.8% in 2006 to 6.4% in 2009.  Then, in Feb 2010, Cyclone Oli hit, and by April, mean coral cover had plummeted down to 0.4%. 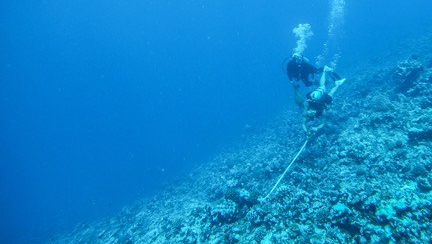 Peter Edmunds has been studying the coral reef ecosystem at Mo’orea for 14 years, and has observed firsthand the sequence of reef death, and the subsequent recovery.  Working with Hannah Nelson and Lorenzo Bramanti, he wanted to document the recovery process, and to identify the underlying mechanisms.  Fortunately Mo’orea is a Long Term Ecological Research (LTER) site, one of 28 such sites funded by the United States National Science Foundation.  Consequently the researchers had long term data available to them, so they could document how coral abundance had changed since 2005.  Their analysis showed the decline in coral cover from 2007 to 2010, but a remarkable rapid recovery beginning in 2012 and continuing through 2017.

% cover (+ SE) of all coral , Pocillopora coral (the species group that the research team focused on). and macroalgae at Mo’orea over a 13 year period based on LTER data. The horizontal bar with COTs above it represents the time period of maximum seastar predation.

What factors caused this sharp recovery? One general process that could be part of the answer is density dependence, whereby populations have high growth rates when densities are low and there is very little competition, and low growth rates when densities are high and there is a great deal of competition between individuals, or in this case, between colonies. The problem is that though density dependence makes intuitive sense, it is difficult to demonstrate, as other factors could underlie the coral recovery.  Perhaps after 2011 there was more food available, or fewer predators, or maybe the weather was better for coral growth. 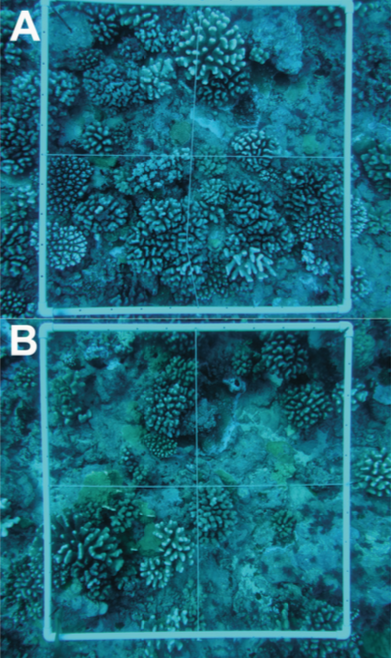 To more convincingly test for density dependence, Edmunds and his colleagues set up an experiment, establishing 18 1m2 quadrats in April, 2016. The researchers reduced coral cover in nine quadrats to 19.1% by removing seven or eight colonies from each experimental quadrat (low density quadrats), and left the other nine quadrats as unmanipulated controls, with coral cover averaging 32.5% (high density quadrats).  They then asked if, over the course of the next year, more recruits (new colonies < 4cm diameter) became established in the low density quadrats.

Returning in 2017, the researchers discovered substantially greater recruitment in the low density quadrats than in the high density quadrats. This experiment provides strong evidence that the rapid recovery after devastation by seastars and Cyclone Oli was helped by a density dependent response of the coral population – high recruitment at low population density. 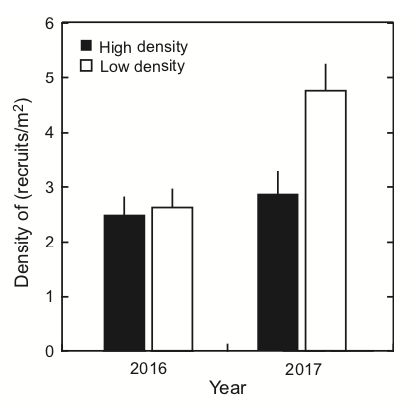 In recent years, many coral reef systems around the world have experienced declining coral cover, a loss of fish and invertebrate diversity and abundance, and an increase in abundance of macroalgae.  While many of these reefs continue to decline, others, such as the reefs at the Mo’orea LTER site, are more resilient, and are able to recover from disturbance.  The researchers argue that we need to fully understand the mechanisms underlying recovery – in other words what is causing the density dependent response? Is it simply competition between coral that cause high recruitment under low density, or may interactions between coral and algae be important?  And what types of interactions influence recruitment rates under different densities?  One possibility is that at high densities, coral are eating most of the tiny coral larvae as they descend from the surface after a mass spawning event.  This raises the important question of why many reefs around the world do not show this density dependent response.  Clearly there is much work remaining to be done if we want to preserve this critically endangered marine biome.

note: the paper that describes this research is from the journal Ecology. The reference is Edmunds, P. J., Nelson, H. R. and Bramanti, L. (2018), Density‐dependence mediates coral assemblage structure. Ecology, 99: 2605-2613. doi:10.1002/ecy.2511. Thanks to the Ecological Society of America for allowing me to use figures from the paper. Copyright © 2018 by the Ecological Society of America. All rights reserved.