Those of us who enjoy eating seafood are dismayed by the dreaded red tide, which renders some of our favorite prey toxic to us.  A red tide occurs when dinoflagellates and other algae increase sharply in abundance, often in response to upwelling of nutrients from the ocean floor.  Many of these dinoflagellates are red or brownish-red in color, so large numbers of them floating on or near the surface give the ocean its characteristic red color. These dinoflagellates produce toxic compounds (in particular neurotoxins) that pass through the food web, ultimately contaminating fish, molluscs and many other groups of species.

Jiayi Xu and Thomas Kiørboe went looking for such a mechanism using 13 different species or strains of dinoflagellates that were presented to the copepod Temora longicornis. This copepod beats its legs to create an ocean current that moves water, and presumably dinoflagellates, in its direction, which it then eats.  For their experiment, the researchers glued a hair to the dorsal surface of an individual copepod (very carefully), and they then attached the other side of the hair to a capillary tube, which was controlled by a micromanipulator. They placed these copepods into small aquaria, where the copepods continued to beat their legs, eat and engage in other bodily functions. 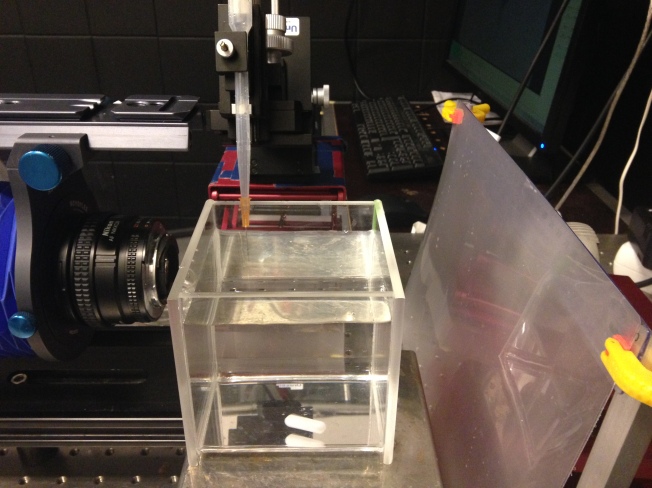 The researchers then added a measured amount of one type of dinoflagellate into the aquarium, and using high resolution videography, watched the copepods feed over the next 24 hours.

Twelve of the dinoflegellate strains were known to be toxic, though they had several different types of poison. Protoceratium reticulatum was a nontoxic control species of dinoflagellate.  As you can see below, on average, copepods ate more of the nontoxic P. reticulatum than they did of any of the toxic species. 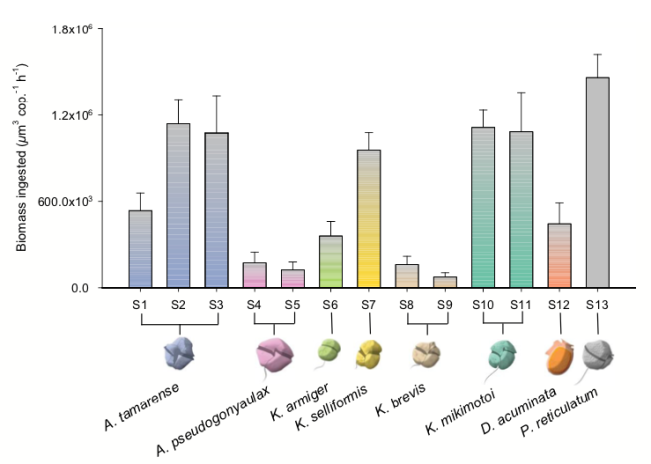 Xu and Kiørboe identified two major mechanisms that underlie selectivity by the copepod predator.  In many cases, the copepod successfully captured the prey, but then rejected it (top graph below). For one strain of A. tamarense prey, and a lesser extent for K. brevis prey, the predator simply fed less as a consequence of reducing the proportion of time that it beat its feeding legs (bottom graph below). 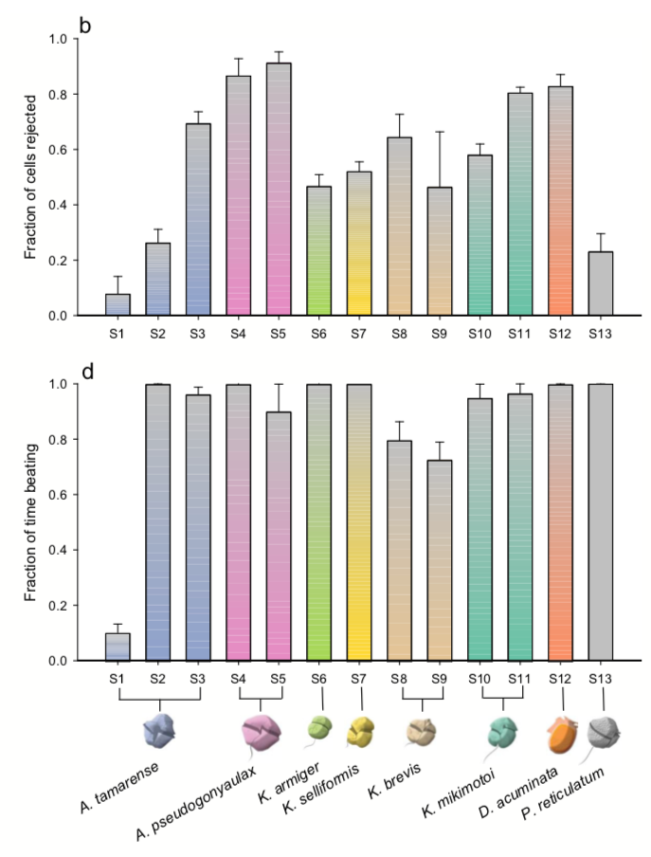 If you look at the very first graph in this post, which shows the average dinoflagellate biomass consumed, you will note that both strains of K. brevis (K8 and K9) are eaten very sparingly.  The graphs just above show that the copepod rejects some K. brevis that it captures, and beats its legs a bit less often when presented with K. brevis. However, the rejection increase and leg beating decreases are not sufficient to account for the tremendous reduction in consumption. So something else must be going on.  The researchers suspect that the copepod can identify K. breviscells from a distance, presumably through olfaction, and decide not to capture them. This mechanism warrants further exploration.

One surprising finding of this study is that the copepod responds differently to one strain of the same species (A. tamarense) than it does to the other strains.  Xu and Kiorbe point out that previous studies of copepod/dinoflagellate interactions have identified other surprises.  For example, there are cases where a dinoflagellate strain is toxic to one strain of copepod, but harmless to another copepod strain of the same species. Also, within a dinoflagellate species, one strain may have a very different distribution of toxins than does a second strain.  So why does this degree of variation exist in this system?

The researchers argue that there may be an evolutionary arms race between copepods and dinoflagellates.  The copepod adapts to the toxin of co-occurring dinoflagellates, becoming resistant to the toxin. This selects for dinoflagellates that produce a novel toxin that the copepod is sensitive to. Over time, the copepod evolves resistance to the second toxin as well, and so on… Because masses of ocean water and populations of both groups are constantly mixing, different species and strains are exposed to novel environments with high frequency. Evolution happens.

note: the paper that describes this research is from the journal Ecology. The reference is Xu, J. and Kiørboe, T. (2018), Toxic dinoflagellates produce true grazer deterrents. Ecology, 99: 2240-2249. doi:10.1002/ecy.2479. Thanks to the Ecological Society of America for allowing me to use figures from the paper. Copyright © 2018 by the Ecological Society of America. All rights reserved.