Life is a series of tradeoffs. As one example, we humans have the opportunity (if we are fortunate enough to be given choices) to opt for an urban or rural existence. The urban life is quicker-paced, offers more cultural opportunities, and can be annoyingly noisy and polluted. The rural existence is more laid-back, has fewer cultural opportunities, and may provide a peaceful and relatively unpolluted environment. These different environments can profoundly affect how we feel, with some people being stressed-out by cities and others by farms. On a personal level, I was born in New York City and now live in a very small town in Virginia – I was one of the fortunate ones who was given a choice.

Heat, light and noise pollution are common in and near cities, and can influence the distribution and behavior of individuals of many different species. But these factors don’t only operate individually; they can work interactively. In other words, someone might not be annoyed by flashing light nor by loud noise, but might find the combination of the two very disturbing. In addition, these factors might not only operate on individuals; they can also affect relationships, or interactions. For example, loud noises generated by natural gas wells have been shown to influence the abundance of seed predators and seed dispersers, ultimately reducing the number of newly-established pine trees.

Armed with this understanding of interactions and relationships, Taegan McMahon and her colleagues wondered how the combination of heat, light and noise pollution might affect urban túngara frogs (Engystomops pustulosus) in comparison to their more rural counterparts. McMahon had observed that urban frogs were not being swarmed by small Corethrella midges that bite them and suck their blood in more rural and forested areas. These midges carry parasites, and if her observation was correct, urban frogs might have lower exposure to some diseases than do their rural counterparts. 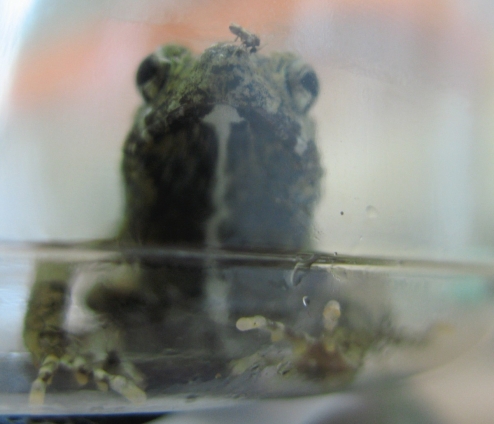 The researchers surveyed 49 túngara frog calling sites in urban (Panama City) and rural (near the small town of Gamboa) areas. At each site they counted the number of frogs, number of midges on or above the frogs, the number of frog egg masses (in foam nests), and measured the air temperature, and the light and sound intensity. As expected, urban calling sites were lighter, noisier and warmer. There were slightly more (statistically insignificant) frogs at the urban sites and considerably more egg masses at rural sites. But the dramatic finding was that there were no midges to be seen on or near any urban frogs. So it might have been hot, bright and noisy, but at least those urban frogs were unbitten!

Analysis of the field survey data showed that temperature did not influence midge abundance but that light and noise were both important. Interestingly, light and noise interacted with each other in an interesting way. At low sound levels (below 65 db) light was important, in that midge abundance decreased at higher light intensity (Figure A). But at high sound levels, it could be pitch black and you would still have no midges (Figure B).

Log(number of midges) in relation to light levels, in field surveys in which noise levels were (A) below 65 db or (B) above 65 db.

Did light and noise somehow influence a midge’s ability to locate a frog? The researchers set up an experiment to see whether midges were attracted to frog calls at low, medium and high light intensities, and low, medium and high sound intensities. The sounds were recordings of Panama City traffic noise. At the same time, the researchers also broadcast the mating calls of túngara frogs at their normal calling intensity (which is remarkably loud for a small animal). They then counted the number of midges attracted to these traps, which were positioned in a rural setting. 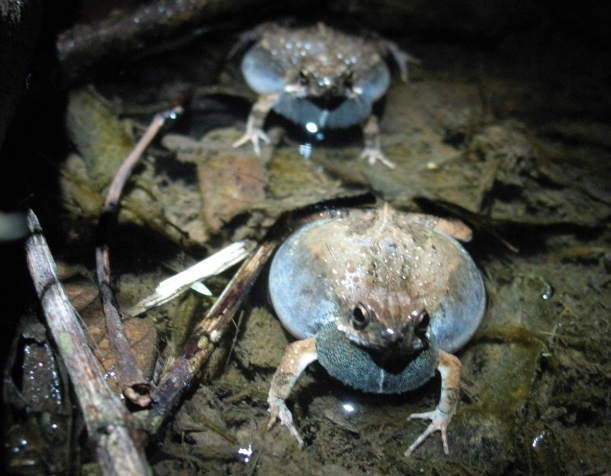 Number of midges attracted to recordings of túngara frog calls in relation to light and sound intensity.

McMahon and her colleagues conclude that city noise and light pollution work together to disrupt the frog-biting midges host-parasite interaction. However, the overall impact of urbanization on túngara frogs is unclear at this point. Frogs can lose up to 10% of their blood volume to midges in a night of active calling. Frog-biting midges can transmit blood parasites such as Trypanosoma tungarae to túngara frogs, so urban frogs may be liberated from this scourge. A midge-free existence may allow urban male túngara frogs to call louder and for longer periods of time, which would make them more attractive to females. However, loud and long calling has also been shown to attract the túngara frogs’s mortal enemy, the voracious frog-eating bat. The researchers call for more research on how urbanization can affect species interactions, and for greater consideration of how different forms of pollution can interact to influence ecosystem dynamics.

note: the paper that describes this research is from the journal Ecology. The reference is McMahon, T. A., Rohr, J. R., & Bernal, X. E. (2017). Light and noise pollution interact to disrupt interspecific interactions. Ecology, 98(5), 1290-1299. Thanks to the Ecological Society of America for allowing me to use figures from the paper. Copyright © 2017 by the Ecological Society of America. All rights reserved.