If you’re ever feeling sorry for yourself, you should know that things could have been much worse; you could have been the brown seaweed, Silvetia compressa. So many problems!  Ocean waves come crashing over you, threatening to pull you off your life-sustaining substrate.  Ocean tides recede, exposing you to harsh sun and dangerously dry conditions. Perhaps worst of all, the fearsome predator Tegula funebralis eats away at your body, and you are powerless to defend yourself from its savage ravages. 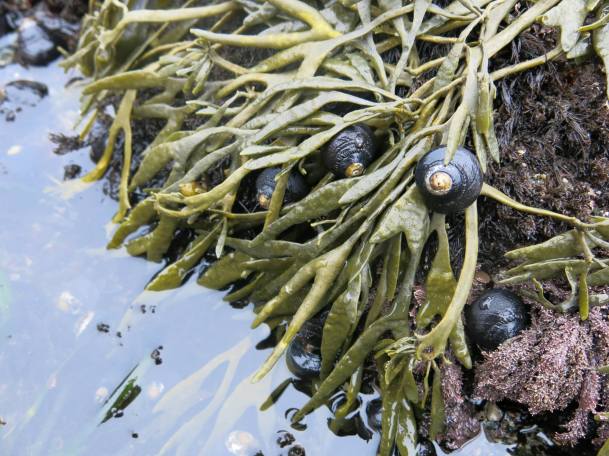 As it turns out, Silvetia is not so powerless after all.  After being partially grazed by Tegula, the seaweed can induce defenses that reduce its palatability.  From prior work, Emily Jones noticed that seaweed from northern California shorelines was much more sensitive to grazing than was seaweed from southern California shorelines.  It took fewer grazing snails to elicit palatability reduction in northern Silvetia than it did in southern Silvetia. She decided to focus her PhD work with Jeremy Long on documenting these geographic differences, and figuring out why they exist. 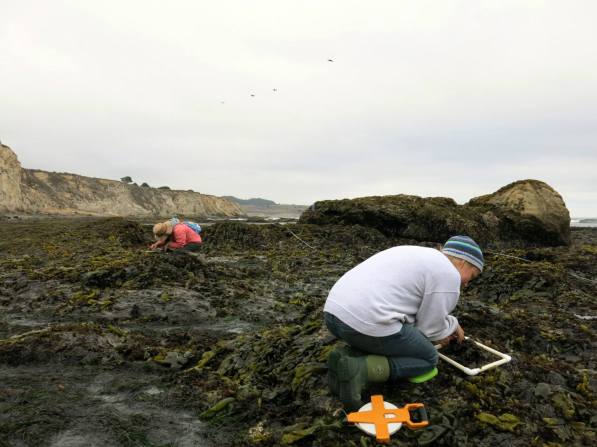 Given these differences in snail abundance, we can now understand why Silvetia is more sensitive in its northern range to Tegula grazing.  But how strong are these differences in sensitivity? Jones and Long developed a simple paired-choice feeding preference assay to test for differences in palatability. At each location (north and south), the researchers gave test snails a choice between feeding on seaweed that had been previously grazed by either 1, 4, 7, 10 or 13 Tegula snails, or to feed on seaweed with no grazing history.  The test snails grazed for five days, and the researchers measured the amount of seaweed consumed for each group. They discovered that even a little bit of previous grazing (the 1-snail treatment) made northern test snails prefer non-grazed northern Silvetia, while only high levels of previous grazing (the 10 and 13-snail treatments) had similar effects on southern snails tested on southern Silvetia.

These findings raised the question of whether the cooler and more nutrient-rich environmental conditions at the northern site were somehow causing this difference in consumption of previously-grazed seaweed.  The researchers designed a series of common garden experiments at the Bodega Marine Laboratory, in which seaweed from both locations were tested in the same environment.  Silvetia was exposed to grazing by two snails, or by no snails for 14 days. When test snails were given the choice of non-grazed or previously-grazed northern Silvetia, they much preferred eating non-grazed Silvetia. In contrast, they showed no preference when given a similar choice between non-grazed or previously-grazed southern Silvetia. This indicates that seaweed from the north are responding more to grazing by reducing palatability than are seaweed from the southern locations.

Amount of previously-grazed and non-grazed northern and southern Silvetia eaten by Tegula in paired choice tests. 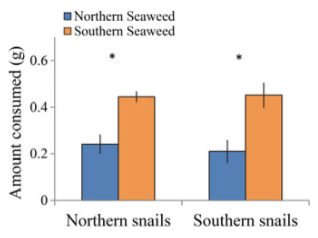 These geographic differences in seaweed sensitivity to grazing are probably due to long-term differences in environmental history.  Southern Silvetia seaweeds live in stressful conditions (high temperatures and low nutrients), and the physiological cost of mounting an induced defense against low and moderate levels of grazing may be too high to be worthwhile. We also don’t know what the overall grazing rates are in the north versus the south, and importantly, how variable the grazing rates are in each location.  Highly variable grazing rates would select for a strong set of induced responses, which could be turned on and off as needed, allowing seaweed, or any plant, to defend itself against new or more hungry herbivores moving into their environment.

note: the paper that describes this research is from the journal Ecology. The reference is Jones, Emily and Long, Jeremy D. 2018. Geographic variation in the sensitivity of an herbivore-induced seaweed defense. Ecology. doi: 10.1002/ecy.2407. Thanks to the Ecological Society of America for allowing me to use figures from the paper. Copyright © 2018 by the Ecological Society of America. All rights reserved.