Scavengers have a bad reputation. They reputedly eat foul smelly stuff, and are too lazy or incompetent to track down prey on their own, depending on “noble” beasts such as lions to kill prey, and then sneaking a few bites when the successful hunters are not looking (or after they’ve stuffed themselves). Of course the reality is that scavenging is simply one way that animals make a living. Many different species, including lions, will scavenge if given the opportunity, and from a human perspective, scavengers provide several important ecosystem services. As one example described by Kelsey Turner and her colleagues, ranchers in parts of Asia gave diclofenac, a non-steroidal anti-inflammatory drug, to their cattle, which had the unintended consequence of killing much of the vulture community. Losing vultures from the scavenging community increased the prevalence of rotting carcasses, which caused feral dog and rat populations to skyrocket, resulting in a sharp increase of human rabies cases in India. The take-home message is that we need to understand what factors influence scavenging behavior and scavenging success.

Turner and her colleagues were particularly interested in whether the size of a carcass, the habitat in which an animal dies, and the time of year, influence scavenging dynamics.   The researchers varied carcass size by using three different species: rats (small), rabbits (medium) and pigs (large). Habitats were clearcuts, mature hardwood, immature pine, and mature pine forest. Time of year was divided into two seasons: warm (May – September) and cool (December – March). I should point out that the cool season was mild by many standards, as the research was conducted at the Savannah River Site in South Carolina, with a mean winter temperature of about 10 ° C. 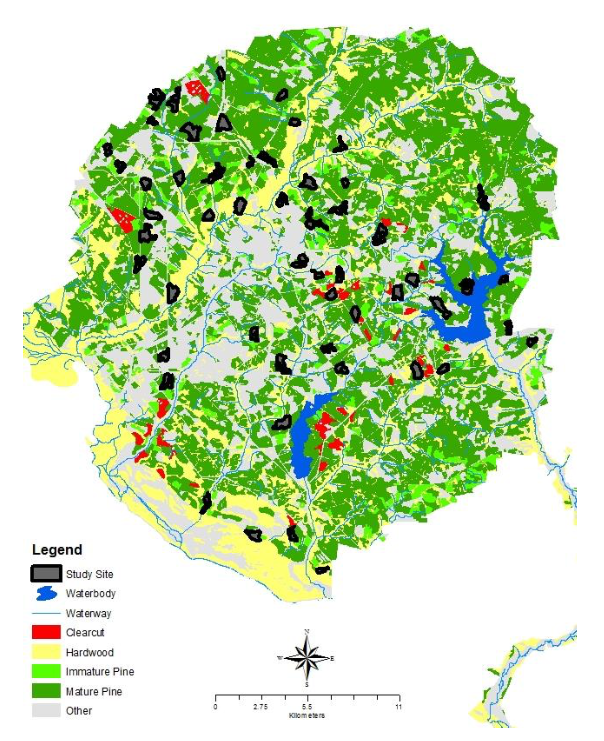 The researchers collected data by laying down carcasses of varying size in each of the habitats in both summer and winter. Each carcass was observed by a remote sensing camera that captured the scavenging events, allowing the researchers to identify the species of each scavenger and how long it took for the carcass to be detected and consumed.

Scavengers discovered 88.5% of the carcasses placed during the cool season, but only 65.4% of carcasses placed during the warm season. Carcass size was also important, with only 53.9% of rats detected, in contrast to 78.5% of rabbits and 97.8% of pigs detected. But habitat interacted with these general findings: for example scavengers consumed all (23) rabbits in clearcuts, but only about 70% of rabbits placed in the other three habitats.

Detection time also varied with carcass size; in general scavengers found pigs more readily than rats or rabbits. As the graphs below show, this relationship was quite complex. Pigs were detected much more quickly than the smaller carcasses in clearcuts, and somewhat more quickly in mature pine. Additionally, this difference between pigs and the other species is stronger in the warm season (left graph) than in the cool season (right graph). In fact, there is no difference in detection time of pigs, rabbits and rats placed in mature pine during the cool season. 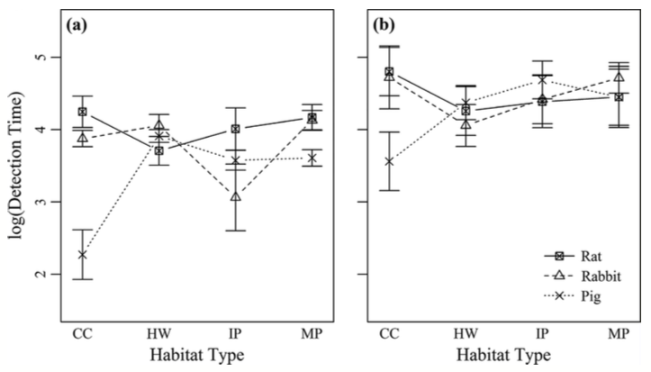 Not surprisingly pigs tended to persist longer (before being totally consumed) than the other two species. More strikingly, persistence time for all three species was much greater in the cool season than in the warm season. 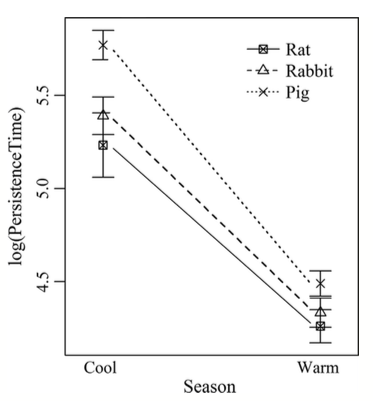 Natural log of mean carcass persistence time (in hours) of rat, rabbit and pig carcasses during the cool and warm seasons.

Turner and her colleagues identified 19 different scavenger species; turkey vultures, coyotes, black vultures, Virginia opossums, raccoons and wild pigs were the most frequent. The first scavengers to detect pig carcasses were usually turkey vultures (76.0%) or coyotes (17.3%). An average of 2.8 different species scavenged at pig carcasses, in contrast to 1.5 at rabbit carcasses and 1.04 at rat carcasses. As you might imagine, most scavengers made short work of rat carcasses, so there was not much opportunity for other individuals or species to move in. Carcasses that persisted longer generally had a greater diversity of scavengers; for example, carcasses scavenged by 1, 2 or 3 species persisted, on average, for 90.5 hours, while those scavenged by 4, 5 or 6 species persisted, on average for 216.5 hours. 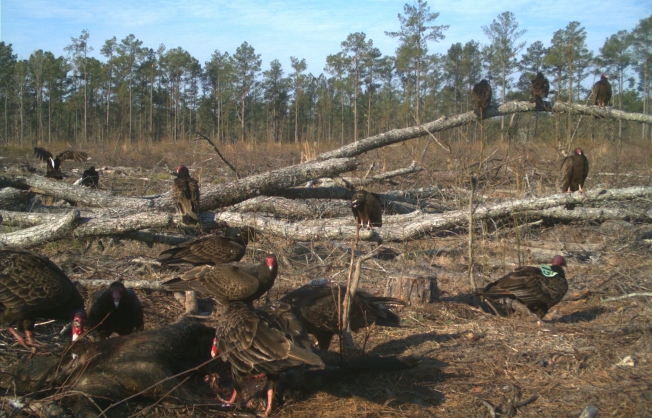 A flock of turkey vultures in a clearcut surround and scavenge a pig carcass. Credit: Kelsey Turner.

Early ecologists viewed feeding relationships within an ecological community as a linear process in which plants extract nutrients from soils and calories from the air, which they pass onto herbivores and then to carnivores, with considerable energy being lost in each transfer. Now, we use a food web perspective, which considers the essential contributions of scavengers and decomposers (among others) to these feeding relationships. Carcasses decompose much more quickly during the warm season, returning calories and nutrients to lower levels of the food web. Microbial decomposers are, in essence, competing with vertebrates for carcasses, and being metabolically more active in warm months, are able to extract a greater portion of the resources from the carcass than they can during the winter. Slow decomposition in winter allows longer carcass persistence, leading to a greater number and greater diversity of scavengers. As a bonus for those who believe in human primacy, these same scavengers help to create a cleaner and healthier world.

note: the paper that describes this research is from the journal Ecology. The reference is Turner, K. L., Abernethy, E. F., Conner, L. M., Rhodes, O. E. and Beasley, J. C. (2017), Abiotic and biotic factors modulate carrion fate and vertebrate scavenging communities. Ecology, 98: 2413–2424. doi:10.1002/ecy.1930. Thanks to the Ecological Society of America for allowing me to use figures from the paper. Copyright © 2017 by the Ecological Society of America. All rights reserved.