Despite their immense size and unfriendly disposition, we humans have done an excellent job decimating the black rhinoceros (Diceros bicornis) population from several hundred thousand individuals around 1900 to fewer than 3000 individuals by 1990. Three subspecies are extinct, one is on the brink, while even the most successful remaining subspecies, the south-central black rhinoceros, is extinct over much of its former range, or only found in nature reserves.  Humans prize its horns, which historically were used for making wine cups, ceremonial daggers, and a variety of medicines that purportedly revive comatose patients, detoxify infections, and aid male sexual stamina. Trade of rhinoceros horn has been illegal since 1977, but poaching abounds.

This population crisis has motivated conservation ecologists to evaluate the best approaches to conserving the black rhinoceros, and to restoring it to parts of its former range. Translocation, moving rhinoceroses from one location where they are relatively well-established, to another where they are extinct or at very low numbers, is a viable approach to restoring populations. However, translocation did not always work well, as some rhinoceroses died following translocation, or failed to reproduce even if they survived translocation. While a post-doctoral researcher at the Zoological Society in San Diego, California, Wayne Linklater recognized that there were large datasets collected by government and non-government agencies that might answer the question about what drives better rhinoceros survival and breeding.  Unfortunately some of these datasets were difficult to access or interpret, but Jay Gedir, Linklater and several other colleagues persevered and combed through the data to identify the factors associated with successful translocation. 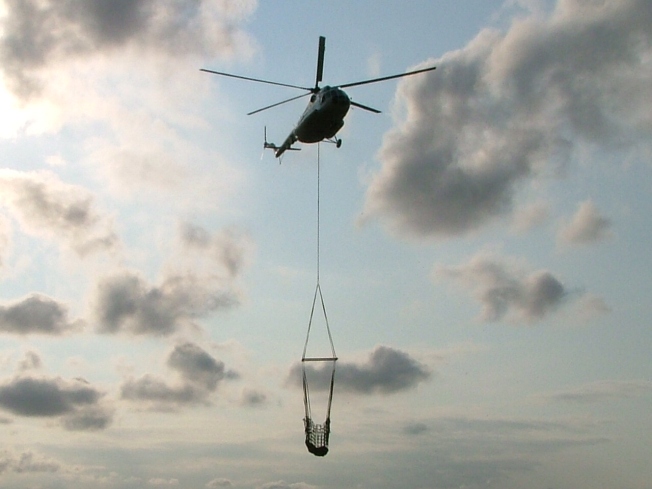 Black rhino is airlifted to temporary captivity before being translocated to a release site. Credit: Andrew Stringer

Many translocation studies use a short-term measure of success, such as survival or fecundity (fertility) of the translocated individuals.  The researchers reasoned that the most important measure, when it is available, is the number of offspring produced by translocated females that survive to an age that they too can reproduce, which in the case of rhinoceros is four years. Based on existing long-term studies, Gedir, Linklater and their colleagues compiled the offspring recruitment rate (ORR), which combines the variables of survival, fecundity, and offspring survival to sexual maturity. They found that ORR was greatest when mature females were translocated into a population that had a female-biased sex ratio.

So why does sex-ratio matter?  The researchers are not certain, but females are subjected to considerable sexual harassment by very aggressive males, so a female-biased sex ratio may lead to less harassment and improved survival and reproductive success for translocated females.

Translocated juveniles took longer to produce their first calf after reaching sexual maturity than did adults after being released. Again this effect was stronger with a male-biased sex ratio. 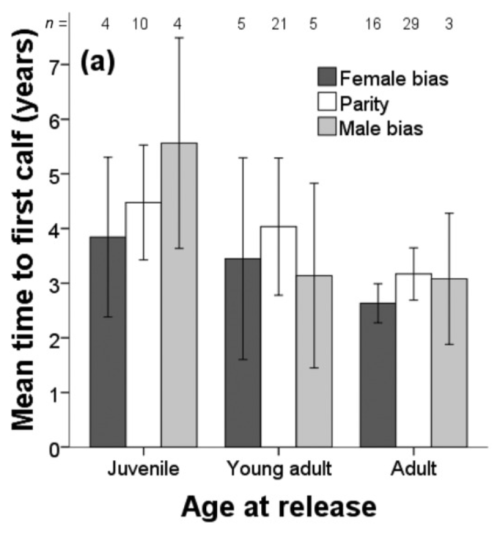 Mean time (years) to produce their first calf after reaching sexual maturity for juveniles, or after release for adults.

Many females (47%) produced no surviving offspring. This pattern of recruitment failure was most common in juveniles, and least common in adults translocated into populations with a female-biased sex ratio.

Recruitment failure of translocated females in relation to age at release and sex ratio bias of the recipient population.

Several factors can cause recruitment failure: 23% of females died following translocation and 24% of surviving females never produced calves. However, calf survival to sexual maturity was a robust 89%, and this survival rate was independent of age at translocation or population sex ratio. Among surviving translocated females, juveniles were about twice as likely as young or old adults to fail to produce a calf, but were equally successful at raising the calves they were able to produce.

Linklater was surprised at how important sex ratios (and presumably social relationships) were, particularly given that black rhinoceroses spend much of their time alone or with one offspring.

Neto (the ranger) and Gwala (the rhino) size each other up.  Credit: Wayne Linklater.

The study did not support a major role for many other factors that had previously been considered important in translocation success, such as habitat quality, population density, number of rhinoceroses released and reserve size. Based on their analysis, the researchers recommend that conservation biologists should translocate mature females into populations with female-biased sex ratios to reduce rates of recruitment failure.  If juveniles must be translocated, they too should be moved into populations that already have a female-biased sex ratio to reduce levels of sexual harassment by males after they mature.