Having grown up in the New York metropolitan area, my only contact with the saguaro cactus, Carnegiea gigantea, was from several TV westerns, which dubiously placed these mammoth cacti in New Mexico, Texas and Colorado.  In fact, the saguaro is limited to the Sonoran Desert of northwestern Mexico, extreme southeast California and southern and central Arizona. You won’t find these cacti further north, because a freeze lasting more than 24 hours kills them.  I still remember my first real sighting of these cacti; I was amazed at how distinct they seemed in comparison to the other vegetation, and I delighted in their abundance. 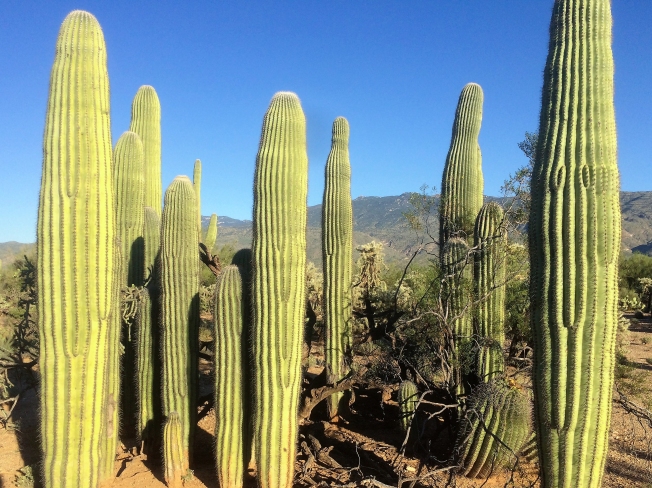 Many others delight in their abundance as well.  The flowers, fruits and seeds feed many animals (including humans).  They were an important food for the Tohono O’odham and Pima Indians – eaten fresh or converted into numerous products including wine, juice, jam and syrup.

Large saguaro with many fruits emanating from the apex of its branches. Credit: Daniel Winkler

Woodpeckers and flickers excavate nests in the saguaro’s trunk, which are subsequently occupied by other animals such as snakes, arthropods and small mammals. 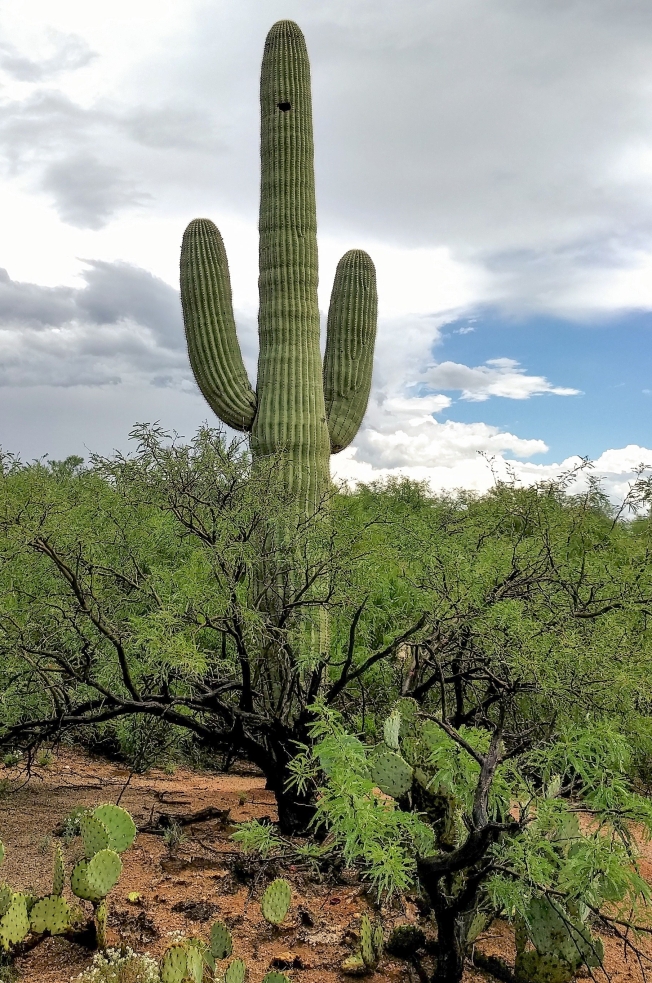 Saguaro with nest cavity excavated near the top of its trunk. Credit: Daniel Winkler

Daniel Winkler also delighted in the saguaro’s awesomeness. As he describes “I fell in love with answering some basic ecology questions about the saguaro. I was surprised that scientists had been studying this wonderful plant for almost 100 years and there were still many basic questions about the species general biology and ecology that remained unanswered. Thus, I was hooked immediately and became obsessed with saguaro.”

Winkler and his colleagues wanted to know how moisture, temperature and habitat influence the establishment or survival of juvenile saguaro seedlings. Previous research had shown that saguaro height can be used to estimate saguaro age, given knowledge of previous rainfall in a particular area. So buoyed by an army of citizen scientists whom they recruited with the help of social media, student groups from schools and volunteers working at the Saguaro National Park, the research team estimated the age of every saguaro on 36 4-ha plots (1 ha = 10,000 m2).

Going into the study, the researchers knew that rainfall was a very important factor, with saguaros surviving better during wet periods.  But they also knew that historically, some areas located near each other showed different establishment trends, thus they suspected that other variables, particularly land use and other landscape factors, might be important.  They did their research in two different districts within the park: 21 plots in the Rincon Mountain District (RMD) on the east side of the park, and 15 plots in the Tucson Mountain District (TMD) to the west. They classified each plot as a particular habitat type based on slope, elevation and soil-type. Bajada was low elevation, flat and had gravelly porous soils.  Foothills were intermediate elevation and intermediate slope, while sloped habitats had highest elevation, steepest slope, and the coarsest rockiest soils.

Winkler and his colleagues calculated the Palmer Drought Severity Index (PDSI) for the years 1950-2003. The PDSI quantifies the water balance between precipitation and evapotranspiration, taking into account not only rainfall but also other factors such as temperature and cloud cover.  The PDSI was estimated by assessing tree ring width for each year in nearby woodlands; wet conditions have wide tree rings (maximum PDSI value = +6), while dry years have narrow tree rings (minimum PDSI value = -6). 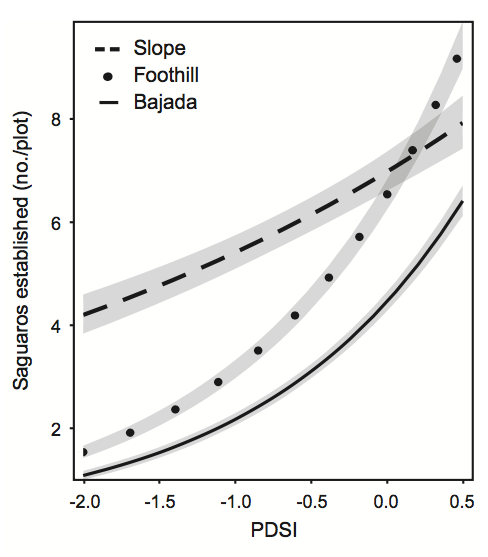 Model projecting number of saguaros established in the three major habitats in relation to PDSI.  Shaded regions are 95% confidence intervals.

The researchers were surprised at how tight the connection was between drought and saguaro establishment. But landscape features are also important.  The TMD is warmer and dryer than the nearby RMD, and had substantially lower establishment during the recent drought. The slopes in the RMD are steeper and rockier than sloped areas of the TMD, and may buffer saguaros from drought by capturing water in rock crevices and holding it for longer periods of time so it can be absorbed by saguaro roots. Nurse trees that provide shade to young saguaros may also be more common on the RMD slopes.

Winkler and his colleagues are concerned about the long-term impacts of climate change on saguaro populations, particularly in the drier areas of the TMD. They urge researchers to explore how long-term management of grazing and invasive species influences saguaro establishment across the landscape.  They also encourage researchers to gather some very basic data about saguaros, such as how they access water and how human water use patterns influence the water’s availability to this iconic species.

note: the paper that describes this research is from the journal Ecology. The reference is Winkler, D. E., Conver, J. L., Huxman, T. E. and Swann, D. E. (2018), The interaction of drought and habitat explain space–time patterns of establishment in saguaro (Carnegiea gigantea). Ecology 99: 621-631. doi:10.1002/ecy.2124. Thanks to the Ecological Society of America for allowing me to use figures from the paper. Copyright © 2018 by the Ecological Society of America. All rights reserved.