Cindy and I and our dog (Cheyanne) recently returned from a two+ week vacation at North Carolina’s Outer Banks.  We stayed in Avon, which is about eight miles north of the iconic Cape Hatteras lighthouse in a large house with a great ocean view.  We got a large house, because we thought our kids might join us, but it turns out that one disadvantage of kids getting older is that their lives become more complex.  Anyhow, several friends stayed with us for a few days, and a grand time was had by all. 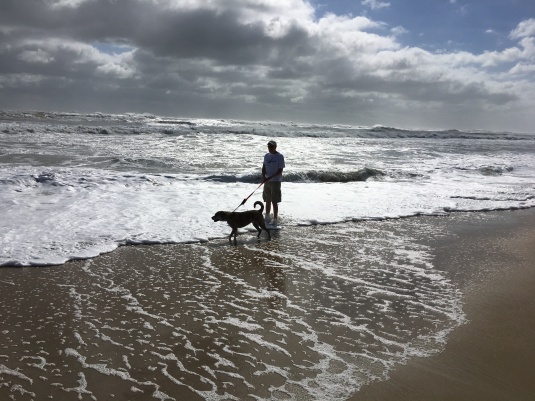 Cheyanne and I ponder the ocean’s vastness. Credit: Cindy Miller

But the point of this post is the trip home.  On Friday, we packed everything into our car, including Cheyanne, and began the eight-hour drive back to our home in Radford, VA.  At Rodanthe (about 15 miles north), traffic just stopped.  We sat in our car for a few minutes, disembarked, and spoke with many people walking by, who told us that the road (NC12) was flooded and covered with sand.  We had heard rumors of flooding, but since the sun was out and the wind relatively calm, we assumed that was all in the past.  Apparently the flooding was so bad that a motor home and the boat it was towing got totally caught up in the sand and water, and was wedged so efficiently that they could not even be towed out until serious excavation happened. That was not going to happen until Saturday. 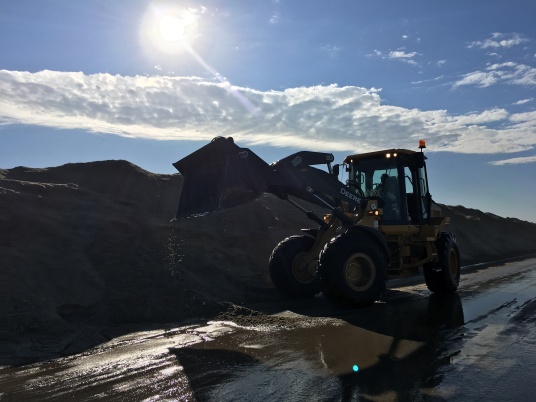 Moving the dunes off of the road. Credit: Cindy Miller.

Saturday at 6 PM we got the call that the road was open and we could head home.  We repacked the car, re-experienced Cheyanne’s baleful look, and set out, with an ETA of 3 AM at the earliest.  Alas the high tide came in, water breached the dunes, and a very kind police officer knocked on our window, imploring us to return to Avon and wait for a better day.  Cheyanne gave him a baleful look, but we obeyed. 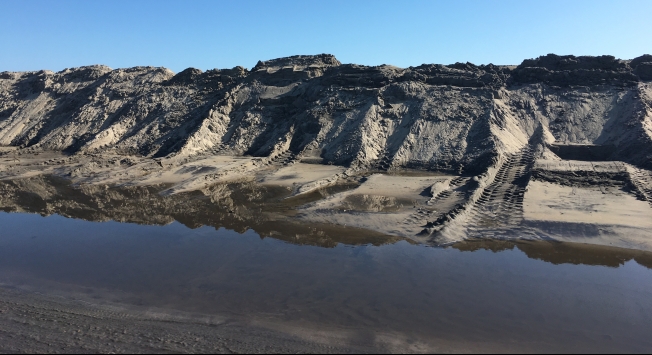 The next morning we set out again; by now we could pack a car in just a few minutes.  Our peanut butter on toast dinner of the previous night had left us a bit peckish, so we stopped off for some pastries and cappuccinos. We headed north once again and this time we were able to pass through the Rodanthe flood, and several others along the way.  The water level was high, but our car had good ground clearance and our escape was relatively uneventful, but done at sub-breakneck speed. 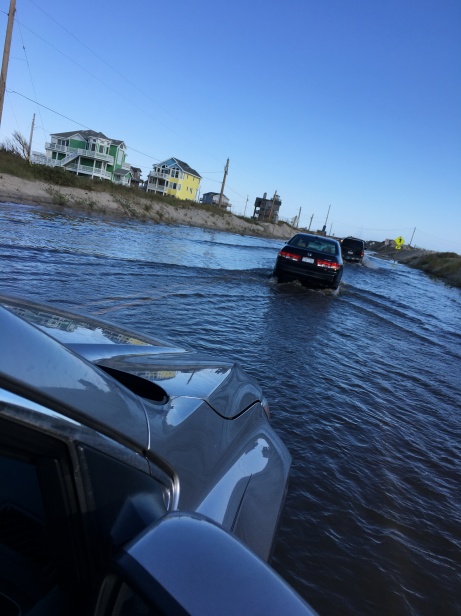 Why was this happening?  The weather was beautiful – no rain, no wind and sunny skies.  It just doesn’t get any nicer than this at the Outer Banks.  As it turns out, there were two provocateurs.  First, there was subtropical storm Melissa several hundred miles to our east, passing harmlessly out to sea, but increasing sea levels.  Second, there was almost a full moon, which also tends to increase sea levels.  But that’s it!

That shouldn’t be enough.  In past years those two events might cause waves to crash to the dunes with increased vigor, but would not cause them to breach the dunes and spill onto the roads.  But those were past years, and now is the present, and sea levels along the North Carolina coast have risen by about one foot in the past 50 years.  Here are some data from Wilmington, NC – about 150 miles south of Avon. 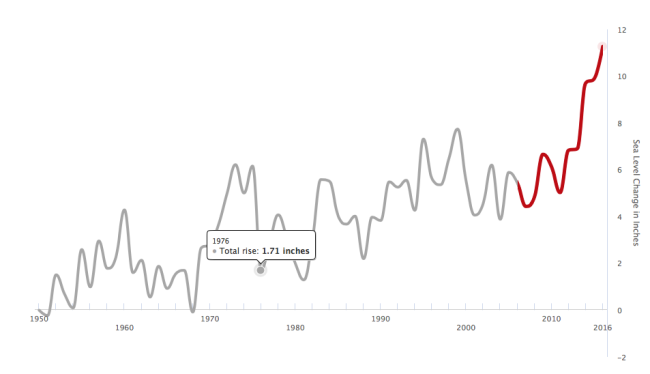 You should note two things.  First, there is substantial year-to-year variation in sea levels. Second, rates of sea level rise are accelerating.  Scientists at the National Oceanic and Atmospheric Administration and the US Army Corps of Engineers expect this trend to continue.  Here is the prognosticated change in sea levels between now and 2050 at Oregon Inlet (just a few miles north of Rodanthe). 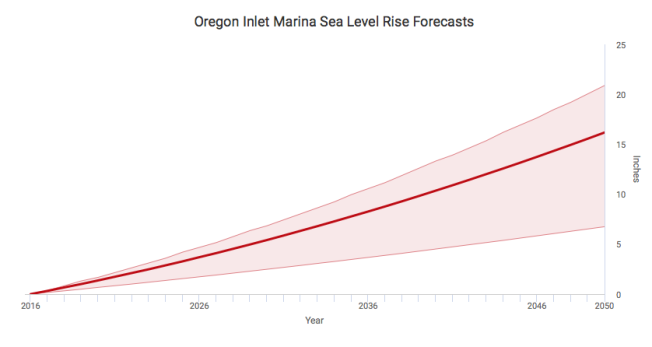 Forecast sea level change between 2016 and 2050. Credit: National Oceanic and Atmospheric Administration, U. S. Army Corps of Engineers and SeaLevelRise.org

This is very bad.  I’ve been vacationing at the Outer Banks for about 25 years; it has become a part of who I am.  I don’t want to give up on this spectacular part of the world, but we must act.  We cannot continue sticking our heads in the sand (which we can now oftentimes find on NC12), pretending that climate change is a construct of the liberal press or elite intelligentsia.

The first step in dealing with a problem is acknowledging that it exists. Climate change is here, and its impact is increasing. An estimated 50 million climate change refugees around the globe are being forced to abandon their homes. More will follow, including our neighbors from North Carolina’s Outer Banks. For their sake, and ours, let’s acknowledge the problem, and focus our resources, energies and talents to reducing the damage in the short term, and dealing with the causes of climate change over the next decades and centuries.