Dispersal – the movement of individuals to a new location – is a complex process that ecologists divide into three stages: emigration (leaving the group), transience through an unfamiliar landscape, and settlement in a suitable habitat. Dispersal is fraught with danger, as dispersers usually have a higher chance of starving, of getting eaten by predators, and may suffer a low reproductive rate.  So why move?

The problem is that there are major issues with not moving.  First, if nobody disperses, population densities could increase alarmingly, putting strains on resources and increasing the incidence of disease transmission.  Second, if nobody disperses, close relatives would tend to live near each other.  If these relatives mate, there would be a high probability of bad combinations of genes being expressed, leading to developmental abnormalities or high offspring mortality (geneticists call this inbreeding depression). In social species, such as meerkats, Suricata suricatta, the issues are even more complex, as dispersal could break up social groups that work well together to detect predators or find resources.  Nino Maag and his colleagues explored what factors influence meerkat dispersal decisions, their survival and reproduction, and how those factors affected overall population dynamics in the Kuruman River Reserve in South Africa. 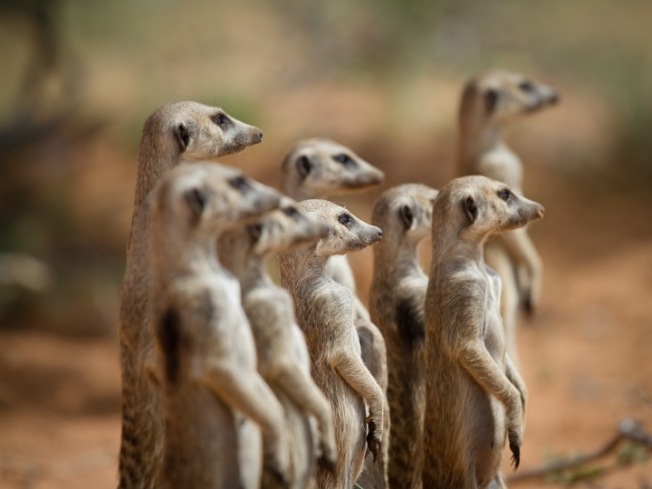 Meerkats live in groups of 2-50 individuals, with a dominant pair that monopolizes reproduction.  While pregnant, the dominant female usually evicts some subordinate females from the group; this coalition of evictees will either remain apart from the group (but within the confines of the territory) and eventually be allowed back in, or else emigrate to a new territory. By attaching radio collars to subordinate females, the researchers were able to follow emigrants to determine their fates. 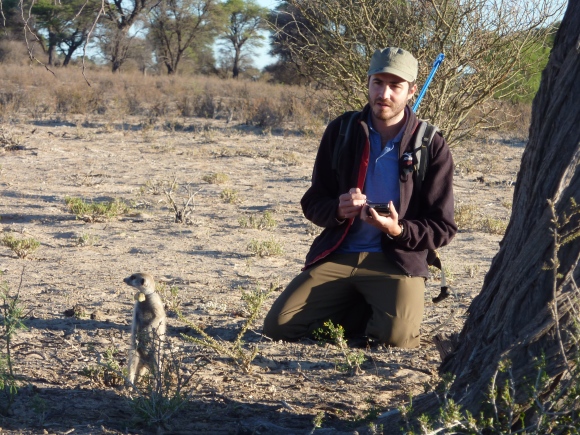 Nino Maag collects data in the Kalahari Desert while a meerkat, wearing a radio collar, strolls by. Credit: Gabriele Cozzi. 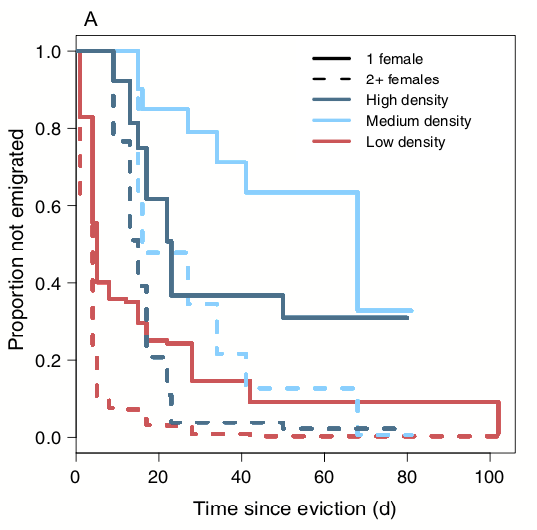 Proportion of evicted female meerkats that had not yet emigrated in relation to time since eviction at low (red), medium (light blue) and high (dark blue) population density.  Solid lines represent individual females, while dashed lines are coalitions of two or more females.

Coalitions were more likely to return to the group if females were not pregnant – in fact 62% of pregnant evictees aborted their litters before being allowed back into the group.  Of the ones that did not abort before returning, only 42% of their litters survived to the first month.

The period of transience, when emigrators are seeking new territories can be prolonged and dangerous.  The mean dispersal distance was 2.24 km, and averaged about 46 days.  Larger coalitions with males present tended to disperse the shortest distances (left graph below). Dispersers took longest to settle at high population density – perhaps there were fewer available territories under those conditions (right graph below). 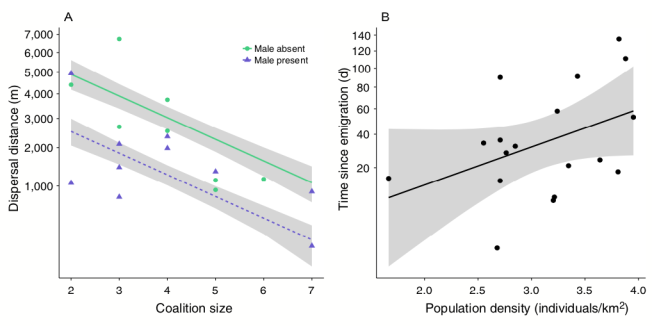 A. Effect of coalition size and presence of unrelated males on dispersal distance. B. Effect of population density on transience time (interval between emigration and settling).

Large coalitions settled more quickly than did small coalitions, particularly if accompanied by unrelated males.  Once settled, females successfully carried through 89% of their pregnancies (compare that to the 62% abortion rate of females that returned to their original group).  These females had a litter survival rate (to the first month) of 65%.

Social and non-social species are influenced by population density in different ways.  The situation is relatively simple for non-social species; as population size increases, competition between individuals increases, so dispersal is more likely.  However, even for non-social species, we might expect dispersal at very low population levels, if there are no mates available. For social species such as meerkats, the situation is more complex.  Cooperation enhances survival and reproduction, so it is better to be in a larger group (with more cooperators). At the same time, if the group is too large, then resource competition starts being an increasingly disruptive factor. As ecologists collect more dispersal data from other social species, they will be able to test the hypothesis that population density in many species influences dispersal in a non-linear way.

note: the paper that describes this research is from the journal Ecology. The reference is Maag, N. , Cozzi, G. , Clutton‐Brock, T. and Ozgul, A. (2018), Density‐dependent dispersal strategies in a cooperative breeder. Ecology, 99: 1932-1941. doi:10.1002/ecy.2433. Thanks to the Ecological Society of America for allowing me to use figures from the paper. Copyright © 2018 by the Ecological Society of America. All rights reserved.