In science, like many other fields, “who you know” can be critical to success. Eric Boyd from Montana State University was introduced to the Great Salt Lake (GSL) ecosystem by his colleague Bonnie Baxter, a professor at Westminster College and the Great Salt Lake Institute in Salt Lake City, Utah.  Baxter was fascinated by microbialites- deposits of carbonate mud of diverse shape and structure, that harbor an impressive diversity and abundance of microorganisms.  Some of these microorganisms are photosynthetic, using dissolved organic carbon from the water to build carbohydrates; as such they are the primary producers which feed the rest of the ecosystem. Baxter impressed upon Boyd the need to understand the ecosystem, which feeds huge populations of two consumer species, the brine fly Ephydra gracilis and the brine shrimp Artemia franciscana. Up to 10 million birds, representing about 250 species, feed on these two species over the course of a year. 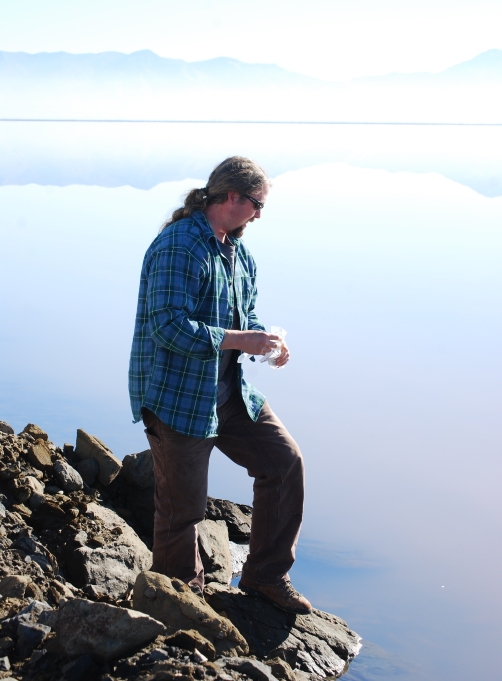 In 1959 a railroad causeway was built that divided GSL into a south and north arm, which differ from each other in one critical way.  The south arm receives freshwater input from three rivers, while the north arm’s only freshwater input is rain and snowmelt.  Both arms are hypersaline; the south arm is 4-5 times saltier than typical ocean water, while the north arm is about twice as salty as the south arm. Boyd and Baxter recognized that these salinity differences were probably impacting the microbial communities in the two arms; in fact preliminary observations indicated that microbialite communities were no longer forming in the north arm.  So when Melody Lindsay began her doctoral research with Boyd, she elected to investigate how salinity was influencing the microbialite communities in the lake. 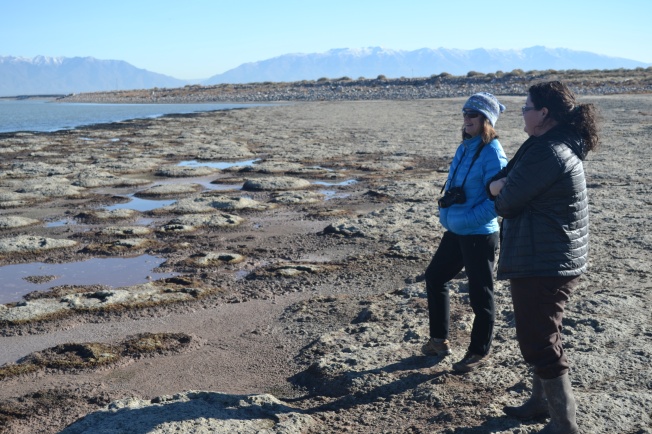 Lindsay and her colleagues collected samples of microbialite mats from the south arm of the lake where the salinity of the water measured 15.6% (as a comparison, typical ocean water is about 3.5%).  At each of six salinity levels (8, 10, 15, 20, 25 and 30%), the researchers set up three microcosms of 150 ml of lakewater, which they then inoculated with 10 grams of homogenized microbial mat. They then sampled microbial diversity and abundance four and seven weeks after beginning the experiment. 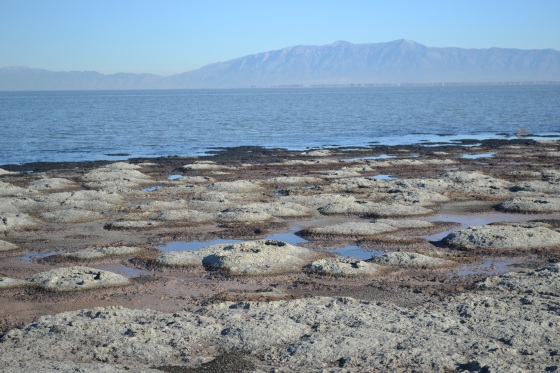 This experiment was conceptually simple, but technically a bit of a challenge.  Microorganisms are difficult to identify and count; and in fact it is likely that some of the species were new to science. Fortunately, researchers can use molecular approaches (quantitative PCR) to measure the quantity of each type of 16S rRNA gene in each microcosm. Each species of microorganism has distinct rRNA genes, so different base sequences indicate different microorganisms.  This allows researchers to estimate how much of each species is present. One restriction is that closely related species will have almost identical rRNA genes, so they may be difficult to distinguish from each other.

Overall, microorganism abundance was 152% greater after four weeks and 128% greater after seven weeks at the 15% salinity. Recall that these samples came from microbialites associated with 15.6% salinity, so this finding indicates good growth at the salinity which the microorganisms have recently experienced.  Interestingly, microorganisms thrived even better at 10% salinity.  But higher salinity levels, particularly  25% and 30%, were very detrimental to microbial growth. 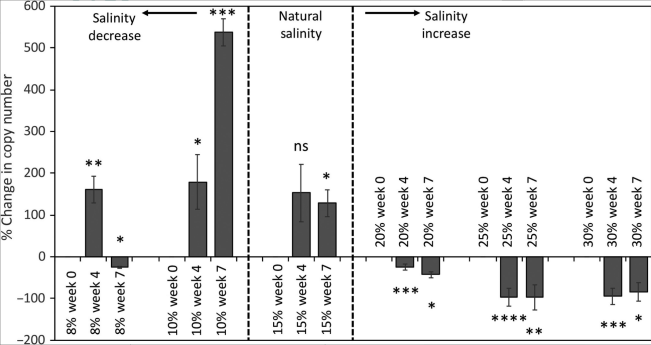 The researchers broke down their results into taxonomic Orders, based on the 16S rRNA sequence of each gene. The two most common Orders were Sphingobacteriales and Spirochaetales, which both grew best at low salinity. The next most common Orders were a cyanobacterium from the Order Croococcales, and an alga from the Order Naviculales.  Species from these two taxonomic Orders are foundational to the ecosystem, because they are photosynthetic and relatively large. These dominant producers either directly, or indirectly, feed the rest of the ecosystem. Croococcales grew best at intermediate salinities (10-20%), while Naviculales did best at 8-15%, but also reasonably well at 20% salinity (see the figure below for a summary of the most common Orders).

Abundance of taxonomic Orders of Microorganisms incubated at different salinities at 4 and 7 weeks, in comparison to initial abundance (week 0 = yellow square). Darker green squares indicate a greater increase, and darker brown squares indicate a greater decrease in abundance.  The most common Orders are on top, least common are on the bottom. Het = heterotroph, PP = primary producers, PhH = photoheterotroph.

Overall, primary productivity, as measured by how much dissolved organic carbon was taken up by the photosynthesizers, was greatest at 10 and 15%, and declined sharply above 20% salinity.  In addition, brine shrimp, one of the two important animal consumers of microorganisms, hatched and survived best at the lowest salinities. 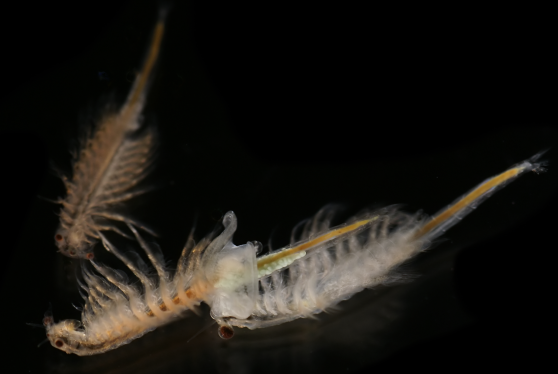 Lindsay and her colleagues conclude that conditions in the south arm are conducive to microbialite communities and the consumers they support.  However, the north arm has much lower productivity, with salinity levels so high that salt is spontaneously crystalizing out of solution in some areas. Given that climate change models predict increased drought severity over the next century in the GSL region, it is very likely that salinity levels will rise throughout the lake.  Over the same time period, humans are expected to increase water usage from the rivers that flow into the lake, which will further drop water levels in the lake, increase salinity in GSL, and dry out many of the microbial mats. This loss of ecosystem production is expected to cascade up the ecosystem, reduce brine shrimp abundance and ultimately the abundance and diversity of migratory birds that feed on them.

note: the paper that describes this research is from the journal Ecology. The reference is Lindsay, M. R.,  Johnston, R. E.,  Baxter, B. K., and  Boyd, E. S.  2019.  Effects of salinity on microbialite‐associated production in Great Salt Lake, Utah. Ecology  100( 3):e02611. 10.1002/ecy.2611. Thanks to the Ecological Society of America for allowing me to use figures from the paper. Copyright © 2019 by the Ecological Society of America. All rights reserved.