For many years, ecologists have been puzzling over the question of why the world is so green.  Given the abundance of herbivores in the world, it seems, on the surface, that plants don’t stand a chance. The famous naturalist/ecologist Aldo Leopold was one of the first scientists to emphasize the role of predators, which provide service for plants by eating herbivores (his example was wolves eating deer, ultimately preserving the plant community growing on a hillside).  As it turns out there are many different predator species providing these services. Colleen Nell began her PhD program with Kailen Mooney with a keen interest on how insectivorous birds locate their prey, and how this could affect the plants that are being attacked by herbivorous insects. 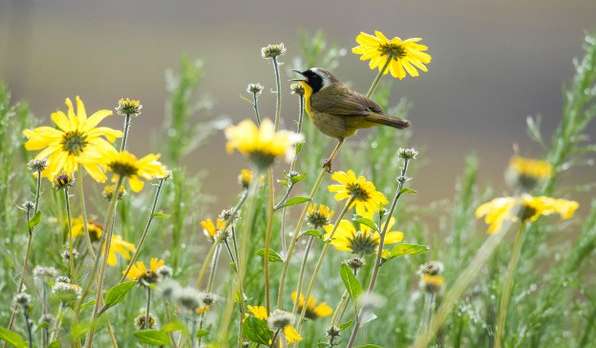 Plants are not as poorly defended as you might expect (having sat on a prickly pear cactus I can  painfully attest to that).  In addition to thorns and other discouraging structures, many plants are armed with a variety of toxins that protect them against herbivores.  Thorns and toxins are examples of direct defenses.  But many plants use indirect defenses that involve attracting a predator to the site of attack.  Some plants emit volatile compounds that predators are attuned to; these compounds tell the predator that there is a yummy herbivore nearby.  Nell and Mooney recognized that plant morphology (shape and form) could also act as an indirect defense, making herbivorous insects more accessible to bird predators. They also recognized that we might expect a tradeoff between how much a plant invests in different types of defense.  For example, a plant that produces nasty thorns might not invest so much in a morphology attractive to predaceous birds.

What is a plant morphology that attracts birds?  The researchers hypothesized that birds might be attracted to a plant with simple branching patterns, so they could easily land on any branch that might be hosting a herbivorous insect (Encelia californica (first photo) has a simple or open branching pattern).  In contrast, birds might have a more difficult time foraging on insects that feed on structurally complex plants that host herbivorous insects which might be difficult to reach.

The researchers chose nine common plant species from the coastal sage scrub ecosystem – a shrub-dominated ecosystem along the southern California coast. For each plant species they measured both its direct resistance and indirect resistance to herbivores.  Plants of each species were raised until they were four years old.  Then, for three months during bird breeding season, bird-protective mesh was placed over eight plants of each species, leaving five or six plants as unprotected controls.

After three months, the researchers vacuumed all of the arthropods from the plants, measured each arthropod, and classified it to Order or Family to evaluate whether the arthropod was herbaceous.

Nell and Mooney evaluated the herbivore resistance of each plant species by measuring herbivore density in the bird-exclusion plants.  Relatively few herbivorous arthropods in plants that were protected from birds would indicate that these plants had strong direct defenses against herbivores.  The researchers also evaluated indirect defenses as the ratio of herbivore density on bird exclusion plants in comparison to controls (technically the ln[exclusion density/control density]).  A density of herbivores on plants protected from birds that is much greater than the density of herbivores on plants that allowed birds would indicate that birds are eating many herbivores. Finally, Nell and Mooney estimated plant complexity by counting the number of times a branch intersected an axis placed through the center of the plant at three different angles.  More intersecting branches indicated a more complex plant.

Indirect defenses (from birds) in relation to plant structural complexity .

Given that structurally complex plants received little benefit from birds, you might expect that they had greater direct defenses in the form of herbivore resistance.  Once again the data support this prediction.

Initially, Nell was uncertain about whether increased plant complexity would deter insectivorous birds.  She points out that the top predators in this ecosystem are birds of prey that circle overhead in search of vulnerable birds to eat.  Structurally complex plants might provide refuge for insectivorous birds, which could result in them spending more time foraging in complex plants.  But the research showed the opposite trend. Plant complexity reduced the foraging efficiency of these small insectivorous birds, who prefer foraging on plants with relatively simple structure, which are easier to access and tend to host more prey.

note: the paper that describes this research is from the journal Ecology. The reference is Nell, C. S., and  Mooney, K. A..  2019.  Plant structural complexity mediates trade‐off in direct and indirect plant defense by birds. Ecology  100( 10):e02853. 10.1002/ecy.2853.  Thanks to the Ecological Society of America for allowing me to use figures from the paper. Copyright © 2019 by the Ecological Society of America. All rights reserved.

As she was preparing to do her dissertation research on the interactions between the Asian chestnut gall wasp, the chestnut blight disease and the European chestnut, Pilar Fernandez-Conradi read a lot of papers about fungal-insect-plant interactions.  She was impressed by the diversity of outcomes that resulted when plants were attacked by both insects and fungi, and wondered whether there were any generalities to glean from these research findings. She asked two basic questions. First, if a plant is infected by a fungus, is it more or less likely to be attacked by insects than is an uninfected plant?  Second, does an insect that attacks a fungal-infected plant perform better or worse than it would have on an uninfected plant?

Three-way interaction between the chestnut tree, the chestnut gall wasp, and the fungus Gnomopsis castanea. Female wasps induce the plant to create galls, which house developing larvae. Green globular galls (with a hint of rose-color) have not been infected by a fungus, while the very dark tissue is the the remains of a gall that was attacked by the fungus. Credit: Pilar Fernandez-Conradi.

Fernandez-Conradi and her colleagues thought they were more likely to discover a negative effect of fungal infection on the preference and performance of herbivorous insects.  Several studies had shown that nutrient quantity and quality of host plants is reduced by fungal infection, so it makes sense that insects would avoid infected plants.  But the researchers also knew that fungal infection can, in some cases, actually increase the sugar concentration of some plants, so insects might prefer those plants and also develop more rapidly on them. In addition, fungal infection can induce chemical defenses in plants that might make them less palatable to insects, or alternatively, fungal infection could weaken plant defenses making them more palatable to attacking insects.

To resolve this conundrum, Fernandez-Conradi and her colleagues did a meta-analysis, of the existing literature, identifying 1113 case studies based on 101 papers.  To be considered in the meta-analysis, all of the studies had to meet the following criteria: (1) report insect preference or performance on fungal-infected vs. uninfected plants, (2) report the Genus or species of the plant, fungus and insect, (3) report the mean response and a measure of variation (standard error, standard deviation or variance). The measure of variation allows researchers to calculate the effect size, which calculates the strength of the relationship that is being explored. The researchers found that, in general, insects avoid and perform worse on infected plants than they do on uninfected plants. 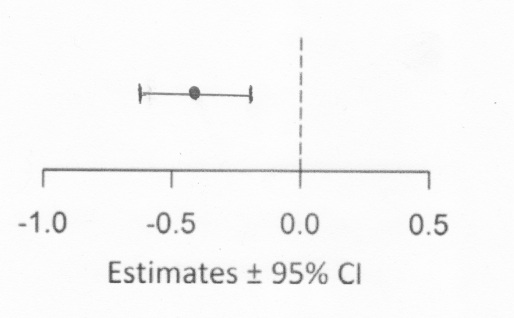 Mean effect size of insect preference and performance (combined) in response to fungal infection infection.  Error bars are 95% confidence intervals (CIs).  In this graph, and the next two graphs as well, a solid data point indicates a statistically significant effect.  You can also visually test for statistical significance by noting that the error bar does not cross the dashed vertical line that represents no effect (at the 0.0 value). The negative value indicates that insects respond negatively to fungal infection.

Fernandez-Conradi and her colleagues then broke down the data to explore several questions in more detail. For example, they wondered if the type of fungus mattered.  For their meta-analysis, they considered three types of fungi with different lifestyles: (1) biotrophic pathogens that develop on and extract nutrients from living plant tissues, (2) necrotrophic pathogens that secrete enzymes that kill plant cells, so they can develop and feed on the dead tissue, and (3) endophytes that live inside living plant tissue without causing visible disease symptoms. 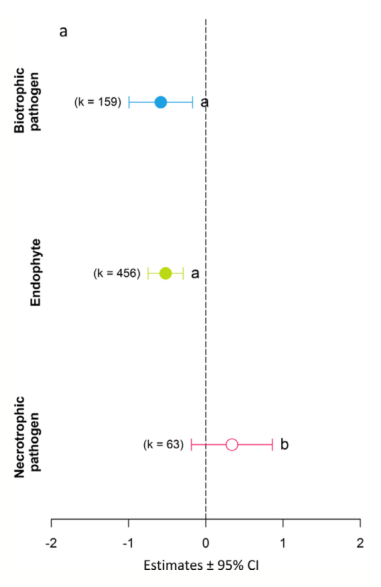 Effect of fungus lifestyle on insect performance.  k = the number of studies.  Different letters to the right of CIs indicate significant differences among the variables (lifestyles).

To further explore this lifestyle effect, Fernandez-Conradi and her colleagues broke down insect response into performance and preference, focusing on chewing insects, for which there were the most data. Insects showed lower performance on and reduced preference (i.e. increased avoidance) for plants infected with biotrophic pathogens. They also performed equally poorly on endophyte-infected plants, but did not avoid endophyte-infected plants (see graph below). This was surprising since you would expect natural selection to favor insects that can choose the best plants to feed on. The problem for insects may be that endophytic infection is basically symptomless, so the insects may, in many cases, be unable to tell that the plant is infected, and likely to be less nutritionally rewarding.

Effects of fungal infection on preference and performance of chewing insects.  k = the number of studies.  Different letters to the right of CIs indicate significant differences among the variables. Variables that share one letter have similar effect sizes.

Many ecological studies deal with two interacting species: a predator and a prey, or a parasite and its host.  Fernandez-Conradi and her colleagues remind us that though two-species interactions are much easier to study, many important real-world interactions involve three or more species. Their meta-analysis highlights that plant infection by pathogenic and endophytic fungi reduces the performance and preference of insects that feed on these plants. But fungus lifestyle plays an important role, and may have different effects on performance and preference. Their meta-analysis also suggests other related avenues for research.  For example, how are plant-fungus-insect interactions modified by other species, such as viruses, bacteria and parasitoids (an animal that lives on or inside an insect, and feeds on its tissues)? Or, what are the underlying molecular (hormonal) mechanisms that determine the response of the plant to fungal infection, and to insect attack?  Finally, how does time influence both plant and insect response?  If a plant is recently infected by a fungus, does it have a different effect on insect performance and preference than does a plant that has suffered from chronic infection.  There are very few data on these (and other) questions, but they are more likely to get pursued now that some basic relationships have been uncovered.

note: the paper that describes this research is from the journal Ecology. The reference is Fernandez‐Conradi, P., Jactel, H., Robin, C., Tack, A.J. and Castagneyrol, B., 2018. Fungi reduce preference and performance of insect herbivores on challenged plants. Ecology, 99(2), pp.300-311. Thanks to the Ecological Society of America for allowing me to use figures from the paper. Copyright © 2018 by the Ecological Society of America. All rights reserved.