Like humans, ants need salt and sugar.  Salt is critical for a functioning nervous system and for maintaining muscle activity, while sugar is a ready energy source. In ectotherms such as ants, body temperature is influenced primarily by the external environment, with higher environmental temperatures leading to higher body temperatures.  When ants get hot their metabolic rates rise, so they can go out and do energetically demanding activities such as foraging for essential resources like salt and sugar. On the down side, hot ants excrete more salt and burn up more sugar.  In addition, like humans, very high body temperature can be lethal, so ants are forced to seek shelter during extreme heat.   As a beginning graduate student, Rebecca Prather wanted to know whether ants adjust their foraging rates on salt and sugar in response to the conflicting demands of elevated temperatures on ants’ physiological systems. 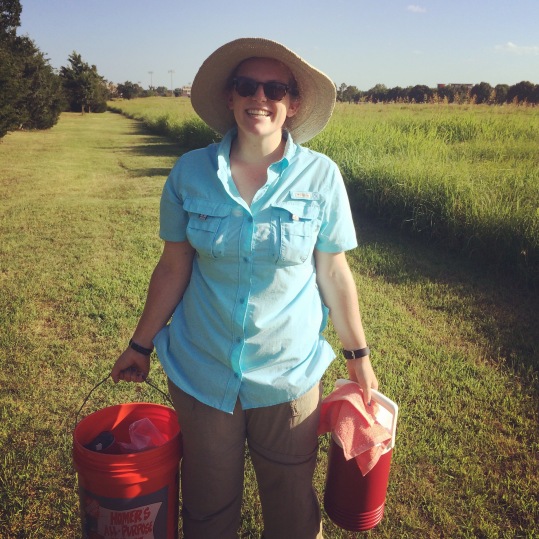 Prather and her colleagues studied two different field sites: Centennial Prairie is home to 16 ant species, while Pigtail Alley Prairie has nine species.  For their first experiment, the researchers established three transects with 100 stations baited with vials containing cotton balls and either 0.5% salt (NaCl) or 1% sucrose.  The bait stations were 1 meter apart.  After 1 hour, they collected the vials (with or without ants), and counted and identified each ant in each vial.  The researchers measured soil temperature at the surface and at a depth of 10 cm. The researchers repeated these experiments at 9 AM, 1 PM and 5 PM, April – October, 4 times each month.

The researchers discovered that ants foraged more at high temperatures. However, when surface temperatures were too high (most commonly at 1 PM during summer months), ants could not forage and remained in their nests.  At all three times of day, ants discovered more salt vials at higher soil temperatures. Ants also discovered more sugar vials at higher temperatures in the morning and evening, but not during the 1 PM surveys. Most interesting, the slope of the curve was much steeper for salt discovery than it was for sugar discovery, indicating that higher temperature increased salt discovery rate more than it increased sugar discovery rate (three graphs on left).

When ants discover a high quality resource, they will recruit other nestmates to the resource to help with the harvest.  Ant recruitment rates increased with temperature to salt, but not sugar, indicating that ant demand for 0.5% salt increased more rapidly than ant demand for 1% sugar (three graphs above on right).

Ant recruitment (y-axis) to different sugar concentrations at a range of soil temperatures (X-axis). Q10 values are to the left of each line of best fit.

Three of the four most common ant species showed the salt and sugar preferences that we described above, but the other common species, Formica pallidefulva, actually decreased foraging at higher temperatures.  The researchers suggest that this species is outcompeted by the other more dominant species at high temperatures, and are forced to forage at lower temperatures when fewer competitors are present.

In a warming world, ant performance will increase as temperatures increase up to ants’ thermal maximum, at which point ant performance will crash.  Ants are critical to ecosystems, playing important roles as consumers and as seed dispersers. Thus many ecosystems in which ants are common (and there are many such ecosystems!) may function more or less efficiently depending on how changing temperatures influence ants’ abilities to consume and conserve essential nutrients such as salt.

note: the paper that describes this research is from the journal Ecology. The reference is Prather, R. M., Roeder, K. A., Sanders, N. J. and Kaspari, M. (2018), Using metabolic and thermal ecology to predict temperature dependent ecosystem activity: a test with prairie ants. Ecology, 99: 2113-2121. doi:10.1002/ecy.2445. Thanks to the Ecological Society of America for allowing me to use figures from the paper. Copyright © 2018 by the Ecological Society of America. All rights reserved.