President Donald Trump was elected on a platform that included building a great wall whose purpose was to keep out unwanted intruders from the south, and that would be paid for (apparently magically) by these same intruders.  The idea of building a great wall has been around for a long time; the Great Wall of China was constructed over a time period of almost two thousand years to keep out unwanted intruders (this time from the north). Not surprisingly, the cost of that Great Wall was not borne by the unwanted intruders. More recently, in the 1880s, the government of Australia constructed a 5500 km fence designed to keep unwanted dingoes away from sheep that pasture in southeastern Australia. As Lily van Eeden describes, the Australian government spends about $10 million dollars per year to maintain the fence but there are almost no data to compare livestock losses on either side of the fence. Thus she and her colleagues decided to look at what was being done globally to evaluate the effectiveness of different methods of protecting livestock. 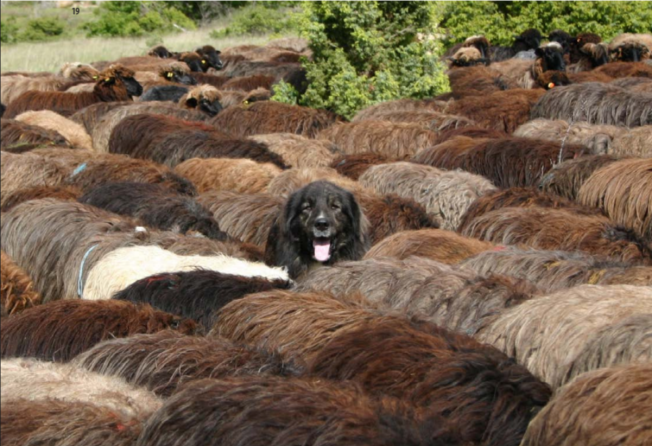 A guardian dog emerges from the midst of its flock in Bulgaria. Credit: Sider Sedefchev.

Van Eeden and her colleagues then did a meta-analysis to see which approach worked best. You can check out my blog from Aug. 2, 2017 (“Meta-analysis measures multiple mycorrhizal benefits to plants”) for a more detailed discussion of meta-analyses. Very briefly a meta-analysis is a systematic analysis of data collected by many other researchers. This is challenging because each study uses slightly different techniques and has different levels of rigor. For this meta-analysis, van Eeden and her colleagues used only two types of studies. One type is a before/after design, in which researchers kept data on livestock loss before the mitigation treatment as well as after. The second type is a control-impact design, in which there was a control group set aside, which did not receive the mitigation treatment. Each study also needed sample sizes (number of herds and/or number of years), means and standard deviations, and had to be run for at least two months to be used in the meta-analysis.

The researchers searched several databases (Web of Science, SCOPUS and European Commission LIFE project), Google Scholar, and also used more informal sources, to collect a total of more than 3300 records. However, after imposing the requirements for types of experimental design and data output, only 40 studies remained for the meta-analysis. Based on these data, all five mitigation approaches reduced predation on livestock. The effect size in the figure below compares livestock loss with the treatment to livestock loss without the treatment, so that a negative value indicates that the treatment is associated with reduced livestock loss. The researchers conclude that all five approaches are somewhat effective, but the large confidence intervals (the whiskers in the graph) make it difficult to unequivocally recommend one approach over another. The effectiveness of lethal control was particularly variable (hence the huge confidence interval), as three studies showed an increase in livestock loss associated with lethal control. 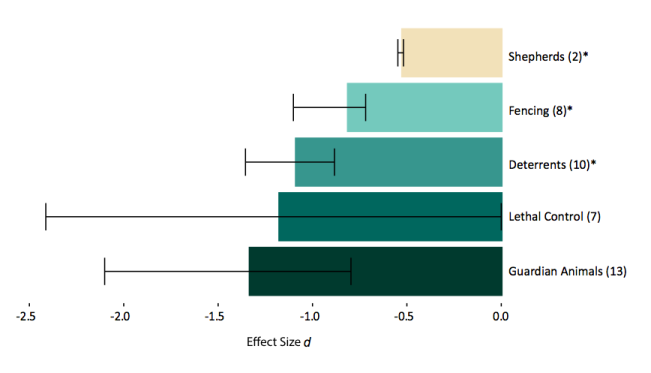 Finding that non-lethal management is as effective (or possibly more effective) than lethal control tells us that we should probably be very careful about intentionally killing large carnivores, since, in addition to being cool animals that deserve a right to exist, they also perform some important ecosystem services. For example, in Australia, there are probably more dingoes northwest of the fence than there are south of the fence, so exclusion may  be working. However there is some evidence that there are also more kangaroos and rabbits south of the fence, which could be an unintended consequence of fewer predatory dingoes. Kangaroos and rabbits eat lots of grass, so keeping dingoes away could ultimately be harming the sheep populations. Dingoes may also kill or compete with invasive foxes and feral cats, which have both been shown to drive native species to extinction, so excluding dingoes may increase foxes and cats, threatening native species.  Van Eeden and her colleagues argue that different mitigation approaches work in different contexts, but that we desperately need evidence in the form of standardized evaluative studies to understand which approach is most suitable in a particular context. 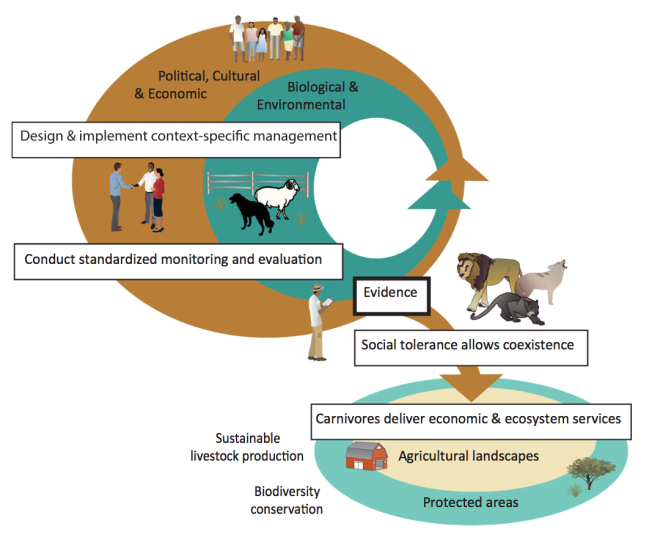 Context-specific approach to managing the co-exstence of predators and livestock.

In all contexts, cultural and economic factors interact in mitigating conflict between humans and carnivores. The dingo is officially labeled as a wild dog, which invaded Australia relatively recently (about 4000 years ago), so the public perception is that this species has a limited historical role. Other cultures may have a different view of their predators. For example, the Lion Guardian project in Kenya, which trains and supports community members to protect lions, has successfully built tolerance for lions by incorporating Maasai community cultural values and belief systems.

To use a phrase that President Trump recently forbade the Centers for Disease Control to use in their reports, our decisions about predator mitigation should be “evidence-based.” We need more controlled studies that address the success of different mitigation approaches in particular contexts. We also must understand the costs of removing predators from an ecosystem, as predator removal can initiate a cascade of unintended consequences.