It is a massive understatement that ecologists and conservation biologists are profoundly interested in how disturbance affects biological diversity. Humans are disturbing ecosystems by degrading or destroying habitat, by fragmenting habitat into pieces that are too small to sustain populations, by directly overexploiting species for consumption or other purposes, and by introducing non-native species (and there’s more!). Some biologists argue that disturbance has gotten so severe that we need to modify our worldview of ecosystems. They argue, for example, that intact grasslands are so rare that we should stop talking about them as an ecosystem (or biome), but rather should more realistically explore the ecology of different types of croplands, which are, in actuality, primarily disturbed grasslands.

Some types of ecosystems, such as rainforests, have survived human impact more than others, but all have been highly disturbed. So it is fitting that conservation ecologists devote their attentions to understanding how disturbance influences biological diversity. Working in Cameroon in 1998, John Lawton and his colleagues assessed species richness (number of different species) in relation to level of disturbance experienced by eight different animal groups: canopy beetles, flying beetles, butterflies, canopy ants, leaf-litter ants, nematodes, termites, and birds. They discovered that more intense disturbances were associated with a significant reduction in species richness for many of the groups.

Nigel Stork worked with Lawton on the original study, and recently reanalyzed the data in the context of changes that have occurred in how conservation biologists view biological diversity. For example, many biologists now argue that conserving biological diversity requires understanding which species are affected by disturbance, rather than the number of species. In addition, not all disturbances have similar impacts on biological diversity. For example, logging with heavy equipment removes trees and compacts soil, while logging with lighter equipment does not compact soil, so the two treatments may have very different impacts. Finally, it may be more informative to group species according to ecosystem function rather than by taxonomic group.

Locations of sampling plots within the Mbalmayo Forest Reserve, Cameroon.  The three blown-up sites had multiple plots with different levels of disturbance, as indicated by the key.

Stork and his colleagues only had data for six of the original eight taxonomic groups. They categorized intensity of disturbance based on how much tree biomass was removed, level of soil compaction, time since disturbance, and tree cover and diversity at time of sampling. This allowed the researchers to assign a disturbance index to each plot, with 0 indicating least disturbed and 1.0 indicating most disturbed. This analysis showed no significant relationship between disturbance and species richness in five of the six taxonomic groups, with only termites declining in richness in response to disturbance.

Species richness in relation to intensity of disturbance for six taxonomic groups considered in the study.

Here’s what they found. For five of six groups, disturbance dissimilarity was associated with significant (solid line) or borderline significant (dashed line) increases in community dissimilarity. So even though the number of species was not affected very much by disturbance (excepting termites), species composition was affected in all groups, with the exception of canopy ants. They conclude that a disturbed forest has very different types of species in it, but not necessarily fewer species. 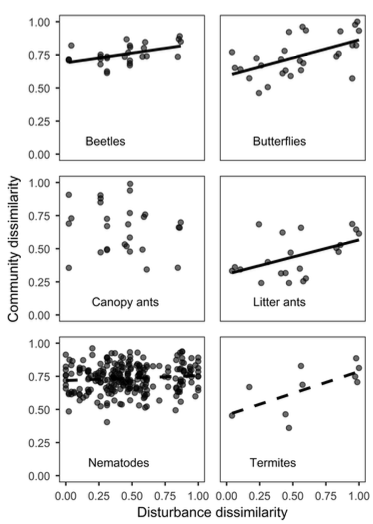 So what should conservation ecologists do with this information? Given the diversity and intensity of disturbance globally, we need to develop a better understanding of how species and communities respond to global change. Species composition may be a more sensitive indicator of disturbance than is species richness. Functional groups may be more helpful than taxonomic groups in identifying how disturbance influences how ecosystems actually work. Perhaps monitoring particular functional groups can give us insight into how unrelated groups with similar ecology might respond to a world that promises to experience increasing levels of disturbance.

note: I discuss two papers in this blog.  The original is from the journal Nature. The reference is Lawton, J.H., Bignell, D.E., Bolton, B., Bloemers, G.F., Eggleton, P., Hammond, P. M., Hodda, M., Holt, R.D., Larsen, T.B., Mawdsley, N.A., Stork, N.E., Srivastava, D.S., and Watt, A.D. 1998. Biodiversity inventories, indicator taxa and effects of habitat modification in tropical forest. Nature, 391: 72-76. The second paper that reanalyzes the original data is from the journal Conservation Biology. The reference is Stork, N.E., Srivastava, D.S., Eggleton, P., Hodda, M., Lawson, G., Leakey, R.R.B. and Watt, A.D., 2017. Consistency of effects of tropical‐forest disturbance on species composition and richness relative to use of indicator taxa. Conservation Biology 31 (4): 924-933. Thanks to the Society for Conservation Biology for allowing me to use figures from the paper. Copyright © 2017 by the Society for Conservation Biology. All rights reserved.