Within ecosystems, trophic cascades may occur when one species, usually a predator, has a negative effect on a second species (its prey), thereby having a positive effect on its prey’s prey. Today’s example considers the interaction between a group of predators (including several fish species, a sea snail and a sea star) their prey (the sea urchin Paracentrotus lividus) and sea urchin prey, which comprise numerous species of macroalgae that attach to the shallow ocean floor. These predators can negatively affect sea urchin populations either by eating them (consumptive effects), or by scaring them so they forage less efficiently (nonconsumptive effects). If sea urchins are less abundant or less aggressive foragers, the net indirect effect of a large population of fish, sea snails and sea stars will be an increase in macroalgal abundance.

A large sea urchin grazing in a macroalgal community.  Notice the white halo surrounding the urchin, indicating that it has grazed all of the algae within that region. Credit: Albert Pessarrodona.

Many humans enjoy eating predatory fish, and we have overfished much of the ocean’s best fisheries including the shallow temperate rocky reefs (4 – 12 m deep) in the northwest Mediterranean Sea. Removing these predators has caused sea urchin populations to explode, overgrazing their favorite macroalgal food source, and ultimately leading to the formation of urchin barrens – large areas with little algal growth, low productivity and a small nondiverse assemblage of invertebrates and vertebrates.

A sea urchin barrens whose macroalgae have been overgrazed by sea urchins. Credit: Albert Pessarrodona

Albert Pessarrodona became interested in this trophic cascade after years of diving in the Mediterranean. He noticed that in Marine Protected Areas, predatory fish abound and there are few visible urchins and lots of macroalgae. In nearby unprotected areas where fishing is permitted, urchins graze out in the open brazenly, and urchin barrens are common. He also wondered whether a second variable – sea urchin size – might play a role in this dynamic. Were large sea urchins relatively immune from predation by virtue of their large size and long spines, allowing them to forage out in the open even if predators were relatively common?

Pessarrodona and his research team used field and laboratory experiments to explore the relationship between sea urchin size and their survival and behavior in high-predator-risk and low-predator-risk conditions. High-risk was the Medes Islands Marine Reserve, which has had no fishing since 1983 and boasts a large, diverse assemblage of predatory fish, while low-risk was the nearby Montgri coast, which has a similar habitat structure, but allows fishing. The researchers tethered 40 urchins of varying sizes to the sea bottom (about 5m deep) in each of these regions, left them for 24 hours, and then collected the survivors to compare survival in relation to body size in high and low-risk conditions. They discovered that large urchins were much less likely to get eaten than were small urchins, and that the probability of getting eaten was substantially greater in the high-risk site.

Probability of being eaten in relation to sea urchin size (cm) in high-risk (blue line) and low-risk (green line) habitats.

Pessarrodona and his colleagues followed this up by investigating whether the relatively predation-resistant large urchins were less fearful, and thus more likely to forage effectively, even in high-risk sites. Previous studies showed that sea urchins can evaluate risk using chemical cues given off by other urchins injured in a predatory attack, or given off by the actual predators. To explore the relationship between these cues and sea urchin behavior, the researchers put either large or small sea urchins into partitioned tanks with an injured sea urchin. Water flowed from one partition to the other, so the experimental sea urchins received chemical cues from the injured urchins. They also had a group of sea urchins placed in similar tanks without any injured sea urchins as controls. The experimental sea urchins were given seagrass to feed on, and the researchers calculated feeding rates based on how much food remained after seven days.

Small sea urchins were not deterred by the presence of an injured urchin (left graph below), while large sea urchins drastically reduced their feeding rates in response to the presence of an injured urchin (middle graph). This was startling as it flew in the face of the commonsense expectation that small sea urchins (most susceptible to predation) should be most fearful of predator cues. The researchers repeated the experiment (under slightly different conditions) placing an actual predator (a fearsome sea snail) on the other side of the partition. Again, large urchins showed drastically reduced foraging rates (right graph below). 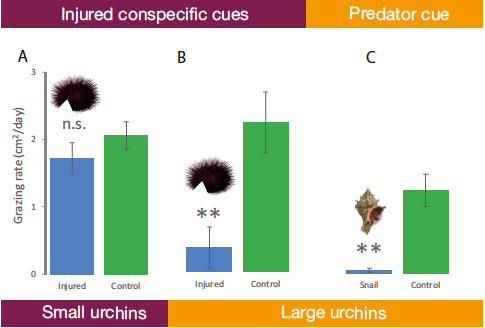 Sea urchin responses to predation risk cues in the laboratory. When exposed to injured urchins – symbolized as having a triangle cut out – (A) small urchins did not reduce their grazing rate, while (B) large urchins drastically curtailed grazing. (C) When exposed to a predatory snail on the other side of a partition, large urchins sharply curtailed grazing. n.s = no significant difference, **P<0.01.

It turns out that large sea urchins are the critical players in this trophic cascade because they do much more damage to algal biomass than do the smaller urchins (we won’t go through the details of that research). The question then becomes how this plays out in natural ecosystems. Do consumptive and non-consumptive effects of predators in high-risk sites reduce sea urchin abundance and reduce the foraging levels of large sea urchins so that macroalgal cover is greatly enhanced? Pessarrodona and his colleagues surveyed high-risk and low-risk sites for sea urchin density and algal abundance. They set up 45 quadrats (40 X 40 cm) at each site, measured each sea urchin’s diameter, and estimated the abundance of each type of algae by harvesting a 20 X 20 cm subsample from each quadrat and drying and weighing the sample. 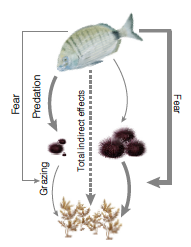 The $64 question is why large sea urchins fear predators so much, while small (more vulnerable) urchins do not. The quick answer is that we don’t know. One possibility is that small sea urchins may be bolder in risky environments since they are more vulnerable to starvation (have fewer reserves), and also have lower reproductive potential since they are likely to die before they get large enough to reproduce. In contrast, large sea urchins can survive many days without food because of their large reserves. In addition, large urchins are close to sexual maturity, and thus may be unwilling to accept even a small risk to their well-being, which could interfere with them achieving reproductive success.

note: the paper that describes this research is from the journal Ecology. The reference is Pessarrodona, A.,  Boada, J.,  Pagès, J. F.,  Arthur, R., and  Alcoverro, T. 2019.  Consumptive and non‐consumptive effects of predators vary with the ontogeny of their prey. Ecology  100( 5):e02649. 10.1002/ecy.2649. Thanks to the Ecological Society of America for allowing me to use figures from the paper. Copyright © 2019 by the Ecological Society of America. All rights reserved.