Humans continue their unique uncontrolled experiment to see how increased atmospheric carbon dioxide and the resulting warmer temperatures influence biomes worldwide.  One expected outcome of this global experiment is that trees in the extreme north will show improved growth resulting from a more benign physical environment.  As it turns out, some regions of the north do show this trend, while others don’t – this lack of consistent response is known as divergence.  For her graduate work, Sarah Ellison, working with Patrick Sullivan, Sean Cahoon and Rebecca Hewitt, wanted to document divergence in northern Alaska, and to figure out what might be causing it.

The Wind River, near Arctic Village in the Arctic National Wildlife Refuge, is the easternmost site in the study. Credit: Patrick Sullivan.

The four study sites within the Brooks Range from west to east: Agashashok, Kugururok, Dietrich and Wind River.

At each study site, the researchers set up climate stations which collected continuous data on air and soil temperature, wind speed and direction, solar radiation, snow depth and precipitation. (Check out the following (you may need to copy and paste into your browser) for an entertaining look at the challenges of doing this research: https://youtu.be/ty6vwio9LvU). 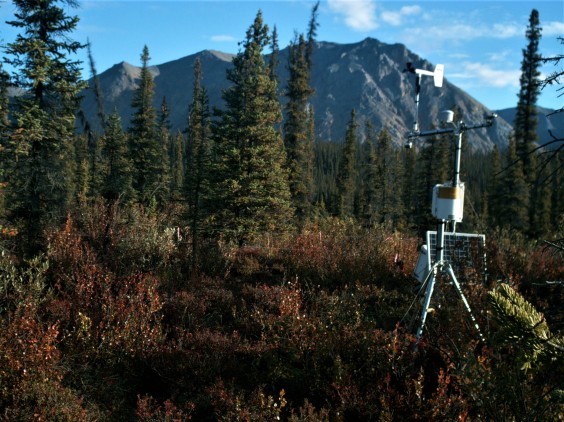 They discovered that soil temperatures were consistently warmer in the western part of the range over the course of the season.

Colder soils are often associated with low levels of available nutrients, because bacteria are less active at colder temperatures, and thus less capable of breaking down nutrients into a form that can be taken up by roots.  In 2014, Ellison and her colleagues measured soil nutrient levels at each site and found generally lower levels in the central (Dietrich) and eastern (Wind River) sites. 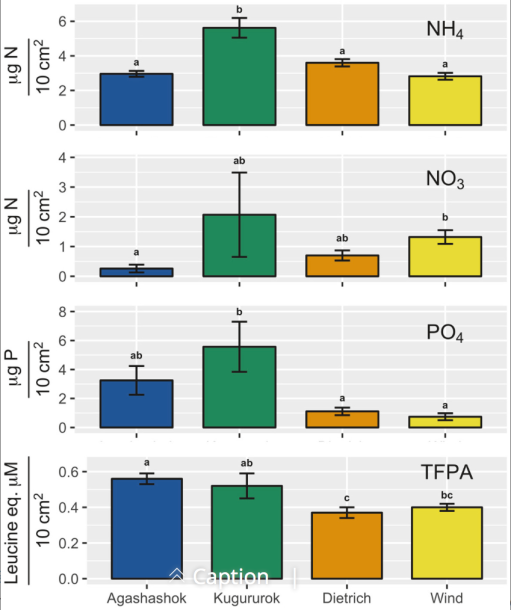 From top: ammonium, nitrate, phosphate and total free primary amine (TFPA – a proxy for amino acids) availability in the soils at the four sites during the 2014 growing season. Error bars are +/- 1 SE.

There were several other important physiological pieces to this puzzle.  Plants in the west grew more quickly than did plants in the east. Rapid growth was associated with greater photosynthetic rates in the western watersheds. The researchers measured needle nutrient concentration and found that it decreased from west to east. Each year, there was a strong correlation between needle nutrient concentration and branch extension (the measure of tree growth), but the correlation with phosphorus was generally stronger than the correlation with nitrogen.

Armed with these findings, Ellison and her colleagues decided to experimentally test whether nutrient availability was limiting growth, particularly in the eastern regions of the Brooks Range.  If so, this would support the hypothesis that cold temperatures and the resulting decrease in nutrient availability were primary factors causing divergence across this vast ecosystem. In June, 2015, the researchers fertilized five trees at each site with a mixture of nitrogen, phosphorus, and potassium fertilizer, and left five similar nearby trees as untreated controls. After one year, branch extension was greatly enhanced at the most eastern site, and only slightly (insignificantly) enhanced at the most western site.

For many years, forest ecologists have believed that forests in young glacial soils are nitrogen limited.  This study, and a few other recent studies, thrust phosphorus into prominence as a factor that can limit forest productivity.  Over time, as the climate continues to warm, soils in the eastern Brooks Range will enjoy increased microbial activity, and may no longer suffer as much from nutrient limitation.

One surprising finding was that mycorrhizal growth on fine roots was more extensive in central and eastern watersheds.  Abundant mycorrhizae were associated with reduced branch extension, suggesting that these mycorrhizae may be parasitic, rather than mutualistic. The researchers are in the process of expanding their study to an even greater spatial extent of 20 sites distributed across the Brooks Range, which will allow them to further explore how general their findings are across this vast biome.

note: the paper that describes this research is from the journal Ecology. The reference is Ellison, S. B. Z.,  Sullivan, P. F.,  Cahoon, S. M. P., and  Hewitt, R. E..  2019.  Poor nutrition as a potential cause of divergent tree growth near the Arctic treeline in northern Alaska. Ecology100( 12):e02878. 10.1002/ecy.2878. Thanks to the Ecological Society of America for allowing me to use figures from the paper. Copyright © 2019 by the Ecological Society of America. All rights reserved.