Fast living makes headlines, as evidenced by such notables as Freddie Mercury, Paul Walker and Lamar Odom.  Unfortunately the first two are dead while Odom was narrowly brought back from a near-death experience – all were victims of their fast life styles.  Like humans, some birds live fast and die young, while others live slow, but may survive to relatively ripe old ages.

The tiny rifleman (Acanthisitta chloris), reintroduced in Tiritiri Matangi, New-Zealand.  This endangered bird feeds on insects that it gleans from tree trunks.  It often has two clutches of 2-5 young per year. Credit: Simon Ducatez.

Simon Ducatez studied invasive cane toads with Rick Shine in Australia, and became interested in why some species were more likely than others to successfully invade new habitat.  The problem for answering that question is that most invasions are not studied until after the invasive species becomes established; by that time it may be too late to identify exactly what factors were responsible for the successful invasion. On his first visit to New-Zealand in 2016, Ducatez discovered ecosanctuaries – enclosed wildlife reserves where invasive predators are eliminated, and native animals (mostly birds) are introduced. He realised that these introductions could provide invaluable information on why species thrive or fail to become established in a new environment. At about the same time, a colleague drew his attention to a database developed by the Lincoln Park Zoo (LPZ) in Chicago, Illinois, which contains data on hundreds of intentional release events (translocation attempts), including information on the survival and reproduction of the released individuals. Analyzing how a species life history could affect the survival and reproduction of these voluntarily introduced populations would provide answers useful for restoration biologists who wish to return native species to habits where they were now extinct, and to ecologists who want to identify the factors promoting biological invasions. 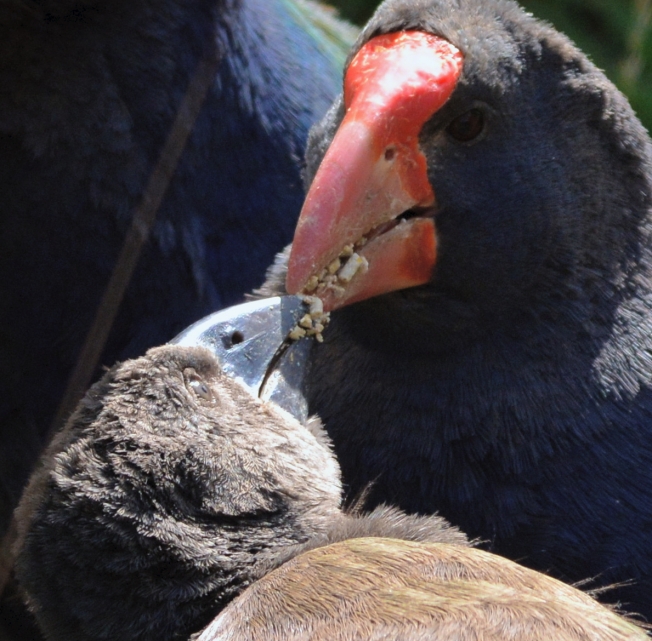 The relatively massive and flightless south island takahe (Porphyrio hochstetteri), reintroduced in New-Zealand.  This bird was thought to be extinct but was rediscovered in 1948 and has benefited from active restoration programs. Credit: Simon Ducatez.

Life history traits are adaptations that influence growth, survivorship and reproduction of individuals of a particular species.  For each species in the LPZ dataset, Ducatez and Shine used the bird literature to gather data on body mass and four life history traits: maximum lifespan, clutch size, number of clutches per year, and age at first reproduction. They then used a statistical procedure – principle components analysis – which described each species based on their life history strategy.  Fast life styles were associated with small bodies, short lifespans, large clutch size and number, and early reproduction.  Slow life styles were associated with large bodies, long lifespans, small clutch size and number, and delayed reproduction. Ducatez and Shine then asked a simple question based on 1249 translocation events in the LPZ dataset – how do fast life style birds perform in comparison to slow life style birds following translocation?

Ducatez and Shine suggest that both restoration biologists and invasion ecologists could use these findings to address major questions in their respective fields.  Restoration biologists wishing to return native species to previously occupied habitat might adopt different approaches based on a species life style. Species with fast life styles suffer from low survival, so restoration biologists should focus on promoting survival by controlling predators or provisioning extra food. Species with slow life styles suffer from low reproductive success, so conservation managers might consider providing extra nest boxes or other resources that promote successful breeding. 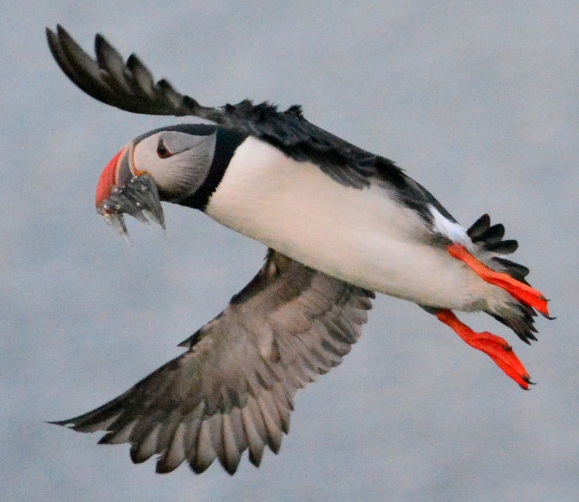 This research informs invasion ecologists that the same trait can have opposite effects on the likelihood that a biological invasion will actually happen.  Thus a slow life style species is more likely to survive moving to a novel habitat, but is unlikely to breed successfully once it gets there.  In contrast a fast life style species is less likely to survive the move, but if it does survive, it may be more likely to successfully reproduce. How this plays out in actual biological invasions is yet to be determined, but at least we now have a better grasp on what factors we should be examining.

North American forests are being invaded. The invading forces use chemical warfare to attack the native inhabitants and to repel counterattacks by hostile enemies. As it turns out, the invader is the humble garlic mustard, Alliaria petiolata, which releases toxic chemical compounds into the soil that reduce the growth rate of many native plant species, and has strong chemical defenses that makes it unpalatable to most herbivores.

Lauren Smith-Ramesh wondered why garlic mustard was not even more successful as an invader. Its chemical arsenal should allow it to overrun an area, but she (and many other researchers before her) observed that garlic mustard invasions often decline after a while. As part of her investigations into garlic mustard’s use of chemicals to inhibit native plants, Smith-Ramesh collected seeds from plants from different populations. While shaking these seeds into bags, she noticed that web-building spiders often colonized the garlic mustard’s seed-bearing structure (silique). Were these spiders somehow behind the garlic mustard’s surprising lack-of-success?

Spiders can benefit plants in several ways. As important predators in food webs, spiders can kill large numbers of herbivorous insects that might otherwise attack a plant. In addition the decaying corpses of their insect prey can add vital nutrients to soils. Garlic mustard does not enjoy these potential spider-associated benefits, because spiders colonize the garlic mustard after it has already gone into decline, and also because garlic mustard is already well-protected (chemically) against herbivorous insects.

About 60% of the spiders were this species – Theriodiosoma gemmosum. Credit Tom Murray.

Smith-Ramesh first wanted to understand the relationship between seed structures (siliques) and spider abundance. She established three different types of plots that measured 2 X 2 meters: (1) S+, which had mustards with intact siliques, (2) S-, which had mustards with siliques removed, and (3) N, which had no garlic mustard plants at all in 2015. After several months, she collected all spiders from the middle square meter of each plot. Plots with garlic mustard with intact siliques (S+) had, by far, the highest spider density. S- plots had a somewhat higher spider density than N plots, which Smith-Ramesh attributes to spiders wandering in from just outside the S- plots (which tended to have more silique-bearing garlic mustard plants nearby than did the N plots). Based on this experiment Smith-Ramesh concluded that garlic mustard siliques were dramatically increasing spider density.

But did increased spider density in S+ plots reduce the number of herbivorous insects, thereby benefiting nearby native plants? Smith-Ramesh set up insect traps that collected insects over two 48 hour time periods – once in August and again in September – in each of the S+, S- and N plots. Both surveys showed fewest herbivorous insects in the S+ plots. This supports Smith-Ramesh’s hypothesis that native plants are benefitting from higher spider density associated with garlic mustard siliques. 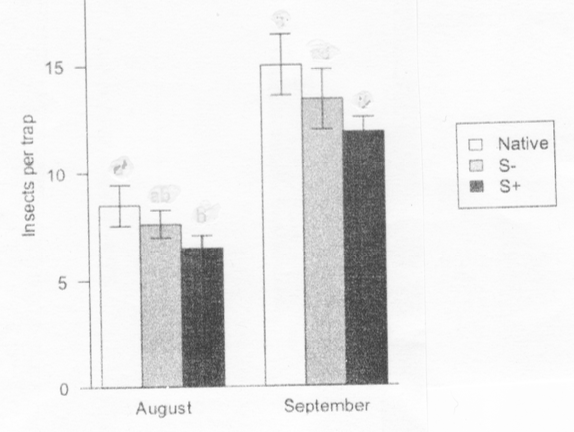 Next, Smith-Ramesh wanted to know whether the decrease in herbivorous insects benefitted native plant growth. To test this directly, she transplanted three types of native plants into her S+, S- and N plots. One of the species, the Hairy Wood Mint Blephilia hirsuta, enjoyed a 50% biomass boost in S+ plots compared to S- plots. The other two native plants species showed very little effect.

Garlic mustard plants with intact siliques also benefitted the soils by increasing the amount of available phosphorus by approximately 60%. This phosphorus may have originated with insect carcasses that made their way into the soil and released their nutrients. In theory, soils with higher phosphorus availability could help support the growth of native plants. Smith-Ramesh plans to explore other plant communities that are suffering from different invasive plants, to see whether these invaders are also inadvertently providing resources or conditions that may undermine the success of their invasion.

note: the paper that describes this research is from the journal Ecology. The reference is Smith‐Ramesh, L. M. (2017). Invasive plant alters community and ecosystem dynamics by promoting native predators. Ecology, 98(3), 751-761. Thanks to the Ecological Society of America for allowing me to use figures from the paper. Copyright © 2017 by the Ecological Society of America. All rights reserved.