Tongariro National Park in New Zealand’s North Island is changing in many ways.  Over the past 50 years, the park, which has three large volcanoes, has increased in temperature at about three times the global average (about 1.5 deg. C) and is also receiving reduced annual rainfall. The park hosts a large number of endemic plants – species that are native to that region and found nowhere else.

Monoao (Dracophyllum subulatum), is an endemic shrub that thrives in low-lying areas between the volcanoes.  Ecologically it is a facilitator, in that its growth form protects a variety of native species from heavy frosts, thereby promoting high species diversity within the plant communities.

In addition to the threat of climate change, portions of Tongariro National Park are also being invaded by common heather (Calluna vulgaris), which has already caused a decline in many native and endemic plant species, and their associated insect communities.  Justyna Giejsztowt had worked previously as a technician for a project that investigated how climate change affected plant communities.  She noticed that the invasive heather had a stronger phenological response to warming than did the native community, flowering earlier and reaching peak floral density at an earlier date. Watching the countryside turn pink from the invasive flowers during that season, she wondered whether the pollinator community might be changing as well, which could affect the reproductive success of the surrounding native vegetation.  So she and her colleagues decided to do some experiments.

Beginning in 2014, the researchers used hexagonal open-topped chambers to increase air and soil temperatures in experimental plots, while also maintaining unmanipulated control plots (you can see the plastic chambers in the top photo of Tongariro National Park). The researchers measured flowering dates for monoao and heather in each plot (and 11 other less abundant species as well), and estimated the number of flowers in each plot on a regular basis.

The researchers expected that experimental warming would cause more overlap between the time period when monoao and heather were both in flower.  This is exactly what they found.  Heather reached a high level of flowering much earlier in the year under experimental warming, increasing the percentage of flowering overlap from 2.79% (top graph below) to 11.27% (bottom graph). 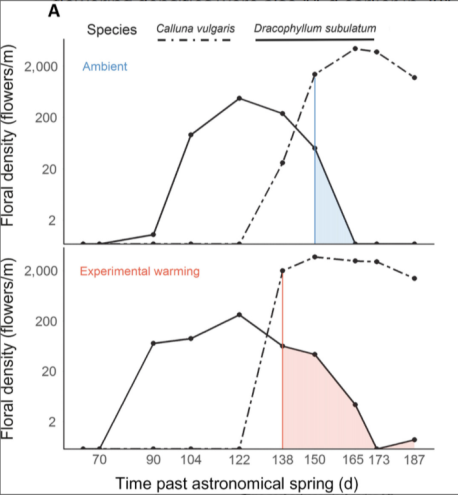 This increase in overlap would increase the number of flowers open at a particular time, which might increase competition for pollinators leading to reduced reproductive success. On the other hand, increase in overlap could make a strong visual or olfactory impression on pollinators, drawing them into the area and thereby increasing plant reproductive success.  Or both forces could be important and cancel each other out.

Giejsztowt and her colleagues set up a second experiment to explore how the ratio of native monoao to invasive heather in a patch, and also the total number of flowers of either type within the patch, influenced monoao’s reproductive success.  They intentionally chose patches that had either (1) high monoao flower numbers and high heather flower numbers, (2) high monoao, low heather, (3) low monoao, high heather, or (4) low monoao, low heather.  The researchers chose nine focal plants within each plot, and from these plants they set up four transects running north, east, south and west. Each transect was 25 meters long and 40 cm wide.  The researchers estimated flower abundance in each transect.  As their measure of monoao reproductive success, they collected seeds produced by each focal monoao plant, dried them and then weighed them.

Giejsztowt and her colleagues found that neither the ratio of native to invasive plants, nor total floral density had any direct effect on monoao reproductive success.  However, the interaction of these two factors had a strong effect.  Seed masses of focal monoao plants were heaviest in patches with a high ratio of native to invasive plants, but only if the patches had intermediate or high overall floral density.  In contrast, monoao in patches composed of mostly invasive heather had consistently low seed masses, regardless of overall flower density in the patch. 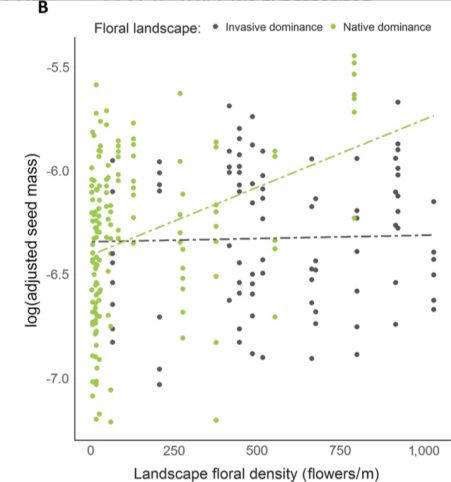 Monoao seed mass (g) adjusted for the effect of plant height, relative to total floral density in the landscape. Colors denote native monoao (green) or invasive heather (black) dominance (making up more than 50% of the flowers).

The researchers were not surprised to find that heather responded more strongly to increased temperature than did monoao, as several studies have shown that invasive species tend to have flexible phenology in response to changing environmental conditions. By shifting its peak flowering earlier in response to warmer temperature, heather increased its flowering overlap with monoao, which could, and did, increase competitive effects on monoao reproductive success.  When there were numerous flowers in a patch, but monoao was rarer than heather, monoao had relatively low reproductive success.  In contrast, if monoao was more common than heather, it achieved much greater reproductive success.

Why does this happen?  The researchers suggest that at high floral densities, heather may outcompete monoao for pollinators.  The mechanism for this competitive effect is unknown; invasive species have been shown to influence pollinator behavior and the numbers and types of pollinator within the community.  Because pollinators are declining globally, it is critical to understand how climate change and invasive species can interact to reduce pollination services to native plants within ecosystems.

note: the paper that describes this research is from the journal Ecology. The reference is Giejsztowt, J.,  Classen, A. T., and  Deslippe, J. R..  2020.  Climate change and invasion may synergistically affect native plant reproduction. Ecology  101( 1):e02913. 10.1002/ecy.2913. Thanks to the Ecological Society of America for allowing me to use figures from the paper. Copyright © 2020 by the Ecological Society of America. All rights reserved.