When dinosaurs roamed the Earth, and I was in high school, acid rain became big news.  Even my dad, who as an industrial chemist believed that industry seldom sinned, acknowledged that he could see how coal plants could release sulfur (and other) compounds, which would be converted to strong acids, borne by prevailing winds to distant destinations, and deposited by rain and snow into soils. Forest ecosystems in North America and Europe are happily, albeit slowly, recovering from the adverse effects of acid deposition, but there are some causes for concern.  At the Hubbard Brook Experimental Forest in New Hampshire, USA, researchers experimentally remediated some of the impacts of acid deposition by adding calcium silicate to a watershed (via helicopter!). A decade later, this treatment had caused a 35% decline in the total carbon stored in the soil. This result was very unexpected and alarming, as this could mean that acid-impacted temperate forests may become major sources of CO2, with more carbon running off into streams, and some becoming atmospheric CO2, as the effects of acid rain wane. Richard Marinos and Emily Bernhardt wanted to determine exactly what caused this carbon loss to better understand how forests will behave in the future as they recover from acidification.

The problem is that calcium and acidity (lower pH is more acid: higher pH is more alkaline) have different and complex effects on plants, soil microorganisms and the soils in which they live. Several previous studies demonstrated that higher soil pH (becoming more alkaline) caused an increase in carbon solubility, while higher calcium levels caused carbon to become less soluble. Soluble organic carbon forms a tiny fraction of total soil carbon, but is very important because it can be used by microorganisms for cellular respiration, and also can be leached from ecosystems as runoff. In general, soil microorganisms benefit as acidic soils recover because heavy metal toxicity is reduced, enzymes work better, and mycorrhizal associations are more robust.  Complicating the picture even more, both elevated calcium and increased pH have been associated with increased plant growth, but increased calcium is also associated with reduced fine root growth.

The researchers then filled 100 2.5-liter pots with these three soil layers (in correct sequence) and planted 50 pots with sugar maple saplings, leaving 50 pots unplanted.  Pots were moved to a greenhouse, and that November given one of five treatments: calcium chloride addition (Ca treatment), potassium hydroxide addition (alkalinity treatment), Ca + alkalinity treatment combined, a deionized water control, and a potassium chloride control. The potassium chloride control had no effect, so we won’t discuss it further.

The following July, Marinos and Bernhardt harvested all of the pots, carefully separating plant roots from the soil, and analyzing the organic horizon and mineral soil levels separately (there wasn’t enough leaf litter remaining for analysis). The researchers measured SOC by mixing soil from each pot with deionized water, centrifuging at high speed to extract the water-soluble material, combusting the material at high temperature and measuring how much CO2 was generated. The result is termed water extractable organic carbon (WEOC). 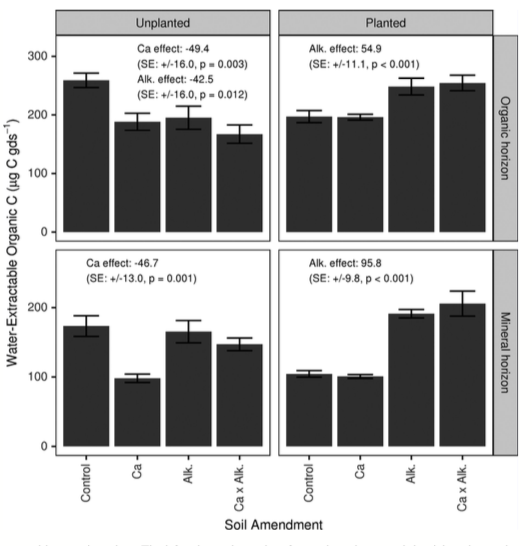 The next question was how might soil microorganisms fit into the plant-soil dynamics?

The researchers weighed the saplings after harvest and discovered that the sugar maples grew best in soils treated with calcium. Two previous studies had treated fields with calcium silicate and found better sugar maple growth in the treated fields.  Marinos and Bernhardt argue that their study provides evidence that it is the Ca enrichment, and not the increased pH, that caused increased growth for both of those studies.

Perhaps the most surprising finding is that higher alkalinity increased soil microbial activity only in pots with plants, and had no effect on soil microbial activity in pots without plants. Somehow, the plants in an alkaline environment are increasing the rate of microbial respiration, perhaps by releasing carbohydrates produced by photosynthesis into the soil, which could then stimulate decomposition of SOC by the microorganisms. Finding that this effect largely disappeared a few days after harvest (bottom graph above), supports the idea that the plants are releasing a substance that helps microorganisms carry on cellular respiration. But this idea awaits further study. In the meantime, we have a better understanding of how forest recovery from acid rain affects one aspect of the carbon cycle, though many other human inputs may interact with this recovery process.

note: the paper that describes this research is from the journal Ecology. The reference is Marinos, R. E. and Bernhardt, E. S. (2018), Soil carbon losses due to higher pH offset vegetation gains due to calcium enrichment in an acid mitigation experiment. Ecology, 99: 2363-2373. doi:10.1002/ecy.2478. Thanks to the Ecological Society of America for allowing me to use figures from the paper. Copyright © 2018 by the Ecological Society of America. All rights reserved.