Sean Connell has watched as south Australia has lost vast expanses of kelp forest and seagrasses over the past years. One of the primary culprits associated with loss of seagrass meadows is excessive nutrients, particularly nitrogen, which enters the ecosystem with runoff, and causes an increase in algal epiphytes (epiphytes are small plants that grow on other plants). Epiphytes can negatively affect seagrass by blocking sunlight needed for photosynthesis, and indirectly, by increasing the rate of cellular respiration within the ecosystem, thus using up oxygen needed by seagrass for metabolic processes. 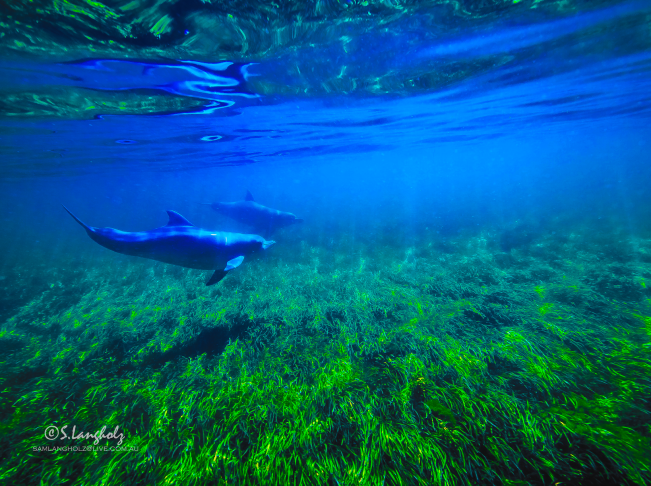 Two dolphins swim above a bed of seagrass off the south Australian coast.

Connell and his colleagues noticed that seagrass loss was often sudden; a large seagrass meadow would appear to be in good shape, and then it would abruptly disappear. They suggested that there might be a threshold effect in nutrient levels that seagrasses can tolerate; that these systems function well until a certain threshold in nutrient levels is crossed, above which there is an abrupt loss of seagrasses. They tested this hypothesis by subjecting plots of the seagrass Amphibolis antarctica to seven different concentrations of dissolved inorganic nitrogen (DIN) over a 10 month period, and monitored the abundance of epiphytes and seagrass over that timespan.

The meadows were about two km offshore from Lady Bay, Fleurieu Penninsula, Australia, in about 5 meters of water. Different amounts of nitrogen fertilizer were wrapped in nylon bags (for slow continuous release of DIN) and staked to the ocean floor. Amphibolis antarctica grows by producing new leaves at the top of each leaf cluster, but at the same time it drops old leaves. Leaf turnover, the researchers’ measure of growth, is simply new leaf production minus old leaf drop. The researchers tied on a small nylon cable at known locations on selected plants, noted how many leaves were above and below each tie at the beginning of the experiment, and recounted leaf number 10 months later. Finally, the researchers measured epiphyte growth by microscopically viewing a sample of seagrass leaves, and counting the number seagrass leaf cells that were covered by epiphytes.

Seagrass growth was relatively unaffected by all tested DIN levels.

Leaf production per day in relation to concentration of DIN.

Leaf drop per day in relation to concentration of DIN.

The graph also shows that the tipping point coincides with an epiphyte cover of approximately 60%. It is possible that increased epiphyte cover may reduce seagrass photosynthetic rates (particularly in lower leaves), so that leaf turnover suddenly shifts into the negative zone, but the study was not designed to identify the underlying mechanism.

Seagrass meadows perform important ecosystem services, such as absorbing excess nutrients from the sediment, and providing habitat and food for a diverse group of grazers and indirectly, for their consumers. Thus seagrass conservation is vital. The danger here is that moderate levels of nutrients do not appear to have much effect on seagrass populations, but there is an abrupt shift to seagrass loss once the nutrient threshold is crossed. This makes the system very difficult to manage, because the loss occurs without warning. Australian ecologists have repeatedly failed to restore lost seagrass meadows, as simply reducing nutrient levels does not reverse the process. Thus anticipating seagrass loss before it happens is the most viable management solution for this critical ecosystem.