As an undergraduate at the University of Manitoba, Megan Ross investigated nutrient reserves stored up by Lesser Snow Geese before reproduction in southern Manitoba. These reserves of fat and protein are critical to female geese, who then fly thousands of kilometers north to breeding grounds above the Arctic Circle, where they lay eggs and raise their young. For her Master’s thesis (this study), Ross investigated how nutrient levels influence adult reproductive success and recruitment of new goslings into the population.

As climates become warmer and more variable, there is a danger that goose reproduction may fall out of synchrony with the availability of high quality food in the feeding grounds – a phenomenon called phenological mismatch. If eggs don’t hatch until substantially after the grass is well-established, then grass nutritive value may not be high enough to raise a goose family. The problem is that even if geese had the ability to adjust the timing of their migration, it would be very difficult for them to know what feeding conditions are like thousands of kilometers away. Ross and her colleagues explored several questions regarding phenological mismatch and how successfully Snow Geese and Ross’s Geese (a smaller relative of Snow Geese – not named after our senior author) raise their broods. 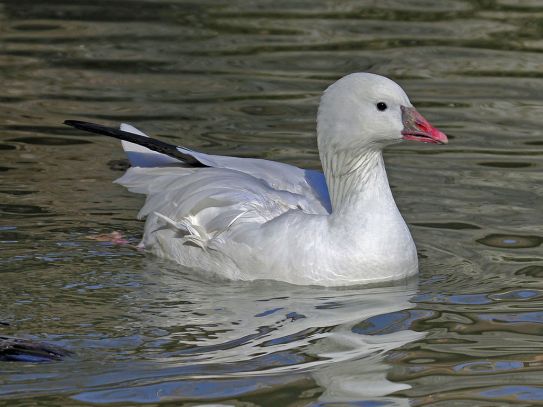 Those of you who hang out near ponds, golf courses, or farms probably know that goose populations are thriving. Over the past few decades, geese at Karrak Lake in Nunavut, Canada, have increased sharply in population, though the growth rate has leveled off in recent years (see graph below). 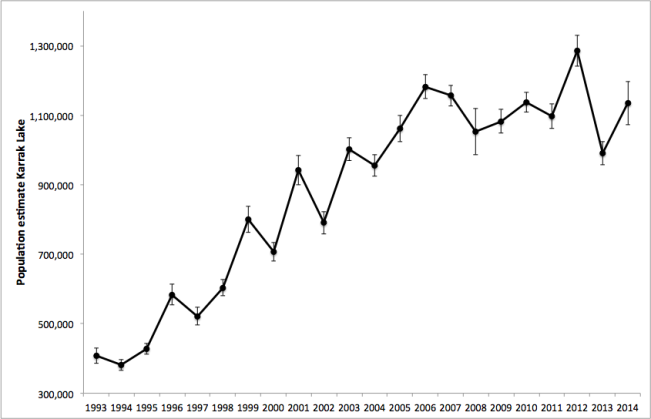 Measuring recruitment of goslings into a population of a million birds is not the easiest task. The researchers used helicopters to herd the birds into portable geese corrals, and then simply calculated the proportion of juveniles as their measure of recruitment. They also weighed, measured and banded all of the captured birds before releasing them, unharmed back into the environment. For each year of the study, they calculated phenological mismatch as the difference between the mean annual hatch date and the NDVI50 date (which stands for the date of 50% annual maximum Normalized Difference Vegetation Index). To calculate NDVI50, researchers use satellite images to estimate the date at which the environment achieved 50% of maximum green-up for the year. 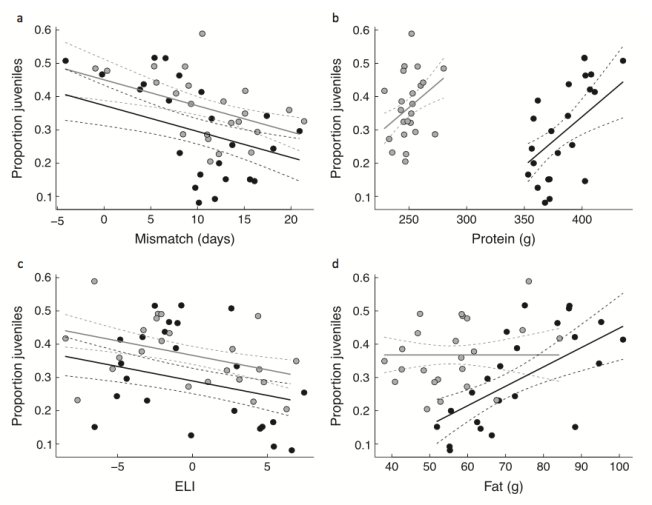 The number of eggs per clutch, and the number of nests that produced at least one gosling (nest success) were highest when geese initiated their nests earlier in the year. Snow Geese laid, on average, more eggs, than did Ross’s Geese, but Ross’s Geese had somewhat higher nesting success than did Snow Geese. But nutrients also figure into this increasingly complex picture. In years when females stored up more protein, they tended to lay more eggs.

Not surprisingly, the researchers also demonstrated that warmer springs were associated with earlier vegetation growth (NDVI50). The geese were able to adjust somewhat to earlier NDVI50 by initiating nests earlier in the year. However, these adjustments were only partial at best, so that phenological mismatch was very high in years that greened-up early (the distance along the x-axis between the data points and the bold dotted line in the graph below). 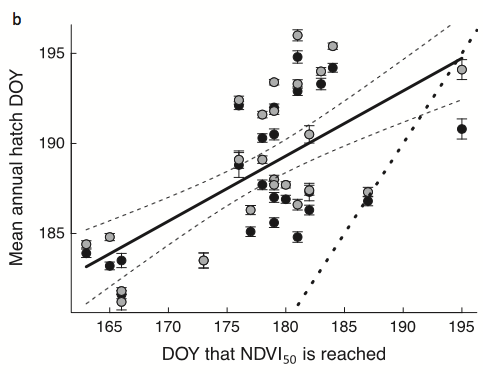 Mean annual hatch date for Ross’s Geese (gray circles) and Lesser Snow Geese (black circles) in relation to the date of the year that NDVI50 is reached.  The bold dotted line is the expected value if there were no phenological mismatch.

From these data, you might ask why don’t the geese migrate earlier in the spring? One problem is that they need enough protein and fat to migrate, to produce eggs and to incubate the eggs during the cool Arctic spring. Another part of the problem is that gonadal development is determined by day length – not temperature – so there is a limit to how early in the year the geese are able to begin courtship and breeding activities. The concern is that if, as expected, environmental warming continues, phenological mismatch could become more extreme, further reducing juvenile recruitment, and putting a seemingly robust population at risk.

note: the paper that describes this research is from the journal Ecology. The reference is Ross, Megan V., Alisauskas, Ray T., Douglas, David C. and Kellett, Dana K. (2017), Decadal declines in avian herbivore reproduction: density-dependent nutrition and phenological mismatch in the Arctic. Ecology, 98: 1869–1883. doi:10.1002/ecy.1856. Thanks to the Ecological Society of America for allowing me to use figures from the paper. Copyright © 2017 by the Ecological Society of America. All rights reserved.

One thought on “Is your goose cooked? Climate change and phenological mismatch.”