One might naively think that because we humans are land-dwelling creatures, our impact on aquatic ecosystems might be relatively minor. Unfortunately, this assumption is incorrect, as human activities are changing aquatic environments in profound ways that influence how aquatic species survive and interact. Global warming is increasing lake and river temperatures, uncontrolled development is causing some streams to run dry and others to flood, and agricultural practices are adding nutrients to many lakes and streams. Because these human impacts occur simultaneously, it is difficult to evaluate how each factor contributes to the observed changes in species relations.

In northern Sweden, lakes vary naturally in the amount of dissolved organic carbon (DOC) they contain. DOC comes from runoff of decaying plant matter, so lakes surrounded by substantial vegetation, or that experience a great deal of water input (runoff) from the surrounding area, would have higher DOC than other lakes. DOC is potentially very important to lakes, because DOC tends to discolor a lake, which reduces light penetration and slows down photosynthesis. On the positive side, carbon may bond to other molecules such as phosphorus and nitrogen, which are important nutrients that may be in short supply in these relatively infertile lakes.   Anne Deininger and her colleagues focused their studies on two factors: DOC and nitrogen. Most lakes have too much nitrogen, a result of excessive use of nitrogen fertilizers that run off into lakes, so these relatively low-nitrogen lakes provided the researchers with a unique opportunity to see how these two factors, DOC and nitrogen, interacted in a natural ecosystem.

The researchers selected six lakes that varied naturally in DOC levels: two low (~7 mg DOC/liter), two medium (~11 mg DOC/liter), and two high (~20 mg DOC/liter). In 2011 they measured everything possible about each lake: abundance of all of the life forms, DOC, temperature, light levels, nutrients and photosynthetic rates. In 2012 and 2013, they supplemented one of each pair of lakes with nitrogen compounds every one to two weeks. The added nitrogen was equivalent to the higher nitrogen inputs that are experienced by lakes in southern Sweden. And, as you might expect, the researchers continued measuring all factors of interest in both the experimental (fertilized) and control (unfertilized) lakes throughout the year – at least until the lakes froze over.

Deininger and her colleagues were most interested in differences in the abundance of phytoplankton – small free-floating photosynthetic organisms, because these are the primary producers – the organisms that produce the chemical energy (via photosynthesis) that enters food webs. There are many different types or groups of these phytoplankton; some are flagellated, with hair-like processes that allow them to navigate in the water column. Some are exclusively autotrophs, producing their own energy from photosynthesis, some are primarily hetrotrophic, eating other organisms or the remains of dead organisms, while others are mixotrophs, using both strategies to produce energy. Cyanobacteria are photosynthetic bacteria, while picophytoplankton are phytoplankton of unusually small size. 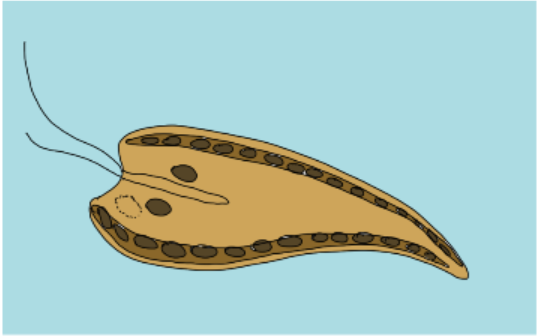 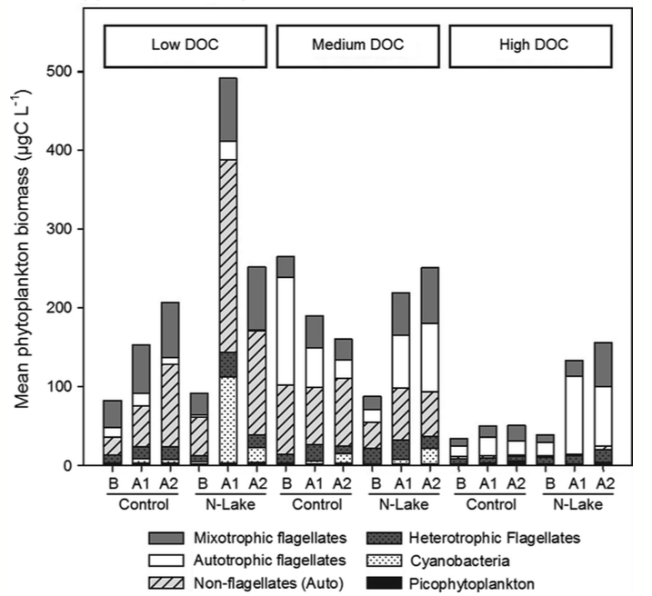 Mean biomass of major phytoplankton groups in relation to DOC.  Recall that B refers to 2011 (the year before fertilization), while A1 and A2 refer to the two years after fertilization (2012, 2013).

The data can be organized so we can get a better view of what is happening quantitatively. Fertilization increases phytoplankton biomass, but much more for lakes with low DOC levels. In addition DOC appears to decrease phytoplankton abundance. 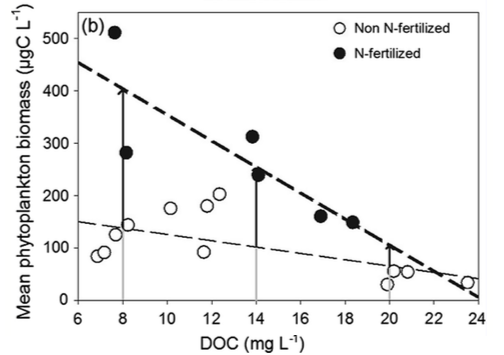 Deininger and her colleagues conclude that in these northern lakes, phytoplankton production is nutrient-limited at low DOC levels, but becomes limited by light availability in more murky waters. So adding nitrogen increases phytoplankton abundance to a greater extent in low DOC lakes. High DOC lakes have more flagellated autotrophs, as these species can swim to the top of the water column where there is more light for photosynthesis. As needed, flagellated phytoplankton can move lower in the water column where nutrients are more abundant.

The researchers emphasize that the nitrogen experiments were only conducted for two years. They don’t know if, for example, the types of species would change if fertilization continued for more than two years. They also don’t know if after 2013, the communities reverted to their pre-fertilization state, or if biomasses remained higher when nitrogen fertilization stopped. These types of questions are important to pursue because we humans are making drastic changes to most of our aquatic systems in a very uncontrolled manner. We need to understand the effects of these changes to the aquatic environment, and also how we can reverse the effects should they prove to be highly detrimental.

note: the paper that describes this research is from the journal Ecology. The reference is Deininger, A., Faithfull, C. L., & Bergström, A. K. (2017). Phytoplankton response to whole lake inorganic N fertilization along a gradient in dissolved organic carbon. Ecology, 98(4), 982-994. Thanks to the Ecological Society of America for allowing me to use figures from the paper. Copyright © 2017 by the Ecological Society of America. All rights reserved.