His first winter at the University of Mississippi Field Station, Matt Pintar was wading through some ponds where he noticed a large number of egg masses. Clear jelly surrounded most of these egg masses, but a whitish jelly encased some of them. These egg masses were produced by the spotted salamander, Abystoma maculatum, which immediately made Pintar wonder why these differences exist within this species. Biologists use the term “polymorphism” to describe a situation like this, in which two or more forms (poly = multiple, morph = form) exist within a population. 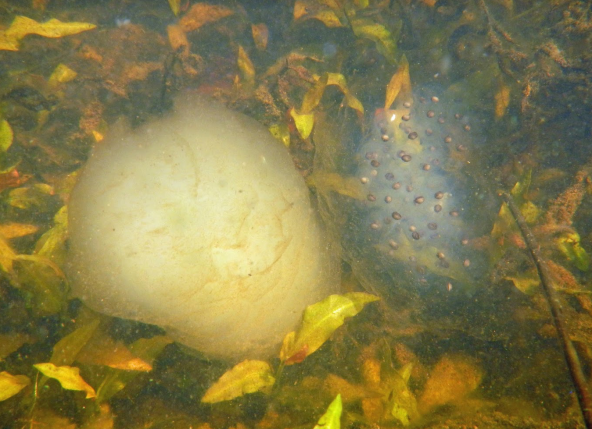 Could it simply be random chance that there were two egg mass morphs? Or was one morph better than the other in getting fertilized by the appropriate sperm, or in keeping the eggs together? Alternatively, perhaps one morph was better at providing nutrients or protecting against predators. The puzzle is that if one morph was superior to the other, then that morph would be favored by natural selection, should outcompete the other, and ultimately cause the second morph to go extinct. So why did both morphs persist in this population of spotted salamanders?

Pintar and his colleague Willliam Resetarits Jr. thought it most likely that the polymorphism was a chance event that provided no benefit to the salamanders. But they did consider the alternative that one morph might be better in some conditions, while the other morph was better in other conditions. Surveys done about 25 years ago suggested that the polymorphism might be connected to differences in water chemistry, so Pintar and Resetarits decided to explore this possible link with a combination of observations of natural ponds and field experiments on artificial ponds.

Nutrient levels of ponds at the field station are influenced by two major factors: the type of surrounding habitat and the duration of time each pond holds water over the course of the year (the hydroperiod). Ponds surrounded by trees, as opposed to grass, have higher nutrient levels courtesy of tree leaves that fall into the ponds and leach out their nutrients. Many of these ponds dry out in the summer, so ponds with a longer hydroperiod will have more time to receive and leach nutrients from organic matter. 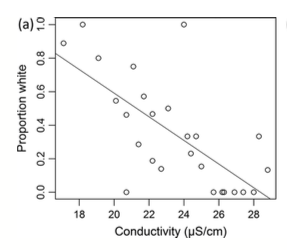 The researchers further explored this relationship by setting up artificial ponds that contained either low or high nutrient levels (obtained by putting leaf litter into some of the pools), and inoculating each pond with both white and clear egg masses. Pintar and Resetarits made sure that larvae were not mixed up once they hatched. They then measured the effects of both nutrient levels and morph on many variables associated with growth and development in these artificial ponds.

Some of the artificial ponds used for controlled experiments on the effects of nutrient levels. Credit: Matt Pintar. 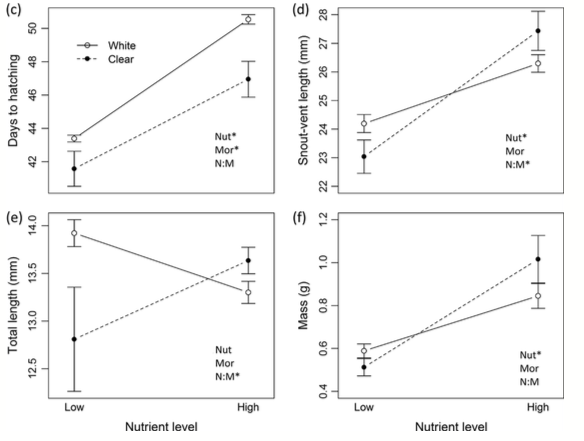 The relationship between nutrient level and (c) days to hatching, (d) snout-vent length (the distance between the tip of the snout and the cloacal opening), (e) total length and (f) body mass.

These findings indicate that the polymorphism is advantageous in environments with considerable variation in nutrient levels. The white morph tends to do well at low nutrient levels, while the clear morph does better at higher nutrient levels. Pintar and Resetarits suggest that these differences in growth and development are likely to translate to higher adult survival and reproductive rates. The researchers used population modeling to demonstrate that under realistic conditions in which some individuals migrate from one pond to another, both morphs will persist indefinitely in ponds of varying nutrient levels.

We still don’t know why the two morphs perform differently under these different conditions. We do know that the outer jelly layer of white egg masses have white crystals made of proteins that are not water soluble, while the outer jelly layer of clear egg masses have smaller water soluble proteins. Pintar speculates that the firmer consistency of white egg masses could cause them to degrade more slowly and to retain their constituent nutrients more effectively than do the clear morphs.

note: the paper that describes this research is from the journal Ecology. The reference is Pintar, Matthew R., and William J. Resetarits Jr. “Persistence of an egg mass polymorphism in Ambystoma maculatum: differential performance under high and low nutrients.” Ecology (2017). The print version will probably come out in May or June of this year. Meanwhile, you can access it here. Thanks to the Ecological Society of America for allowing me to use figures from the paper. Copyright © 2017 by the Ecological Society of America. All rights reserved.