While many of us appreciate oysters as delectable delights, we may underestimate the environmental benefits they also bring to the table. As filter feeders, they remove vast quantities of organic debris from the water, and as reef builders they protect our shorelines from violent wave action.

Of course, humans are not the only animals to enjoy eating oysters. For example, along portions of the Florida coast dominated by the reef-building oyster Crassostrea virganica, the mud crab, Panopeus herbstii, is a major consumer of juvenile oysters. In some locations, the average abundance of these voracious crabs can exceed 10 adults/m2 of reef. But all is not food and gravy for these crabs, as lurking in nearby burrows are equally voracious crab-eating toadfish, Opsanus tau. When toadfish are detected, the mud crabs will hide within the protective matrix of oyster shells and sediment that form the reef. 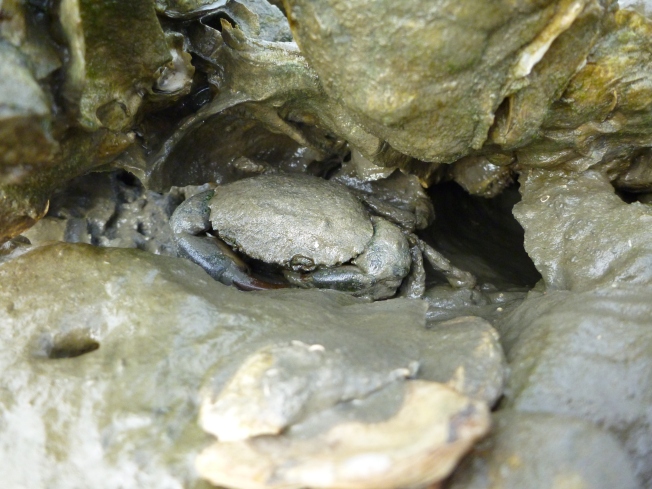 A mud crab hiding among a cluster of oysters. Credit: WFSU, Public Media

By consuming mud crabs, toadfish are indirectly protecting oysters from being eaten. Ecologists call this a consumptive effect (CE). But David Kimbro and his colleagues have also shown than toadfish, by their mere presence, can also protect oysters by scaring the crabs into hiding. Since, in this case, they are not consuming the crabs, ecologists call this a non-consumptive effect (NCE). Together, CEs and NCEs should both increase oyster survival. More surviving oysters lead to higher overall feeding by oysters, which lead to more oyster poop, and more organic matter deposited into the sediment below. Ecologists call this type of relationship a trophic cascade, because the effects on one species cascades down through the ecosystem. In this case, increasing toadfish will decrease crabs, thereby increasing oysters and sediment organic matter. Conversely, decreasing toadfish should increase crabs, thereby decreasing oysters and sediment organic matter.

Kimbro and his colleagues wanted to explore this trophic cascade in more detail. They set up an experiment with 24 artificial reefs (made out of natural materials, except for the surrounding fence), which included 35 L of live oysters. They supplied each reef with 0, 2, 4, 6, 8 or 10 live crabs, and provided half of the reefs with a caged toadfish. They then measured oyster survivorship in relation to crab density in the presence or absence of predators. 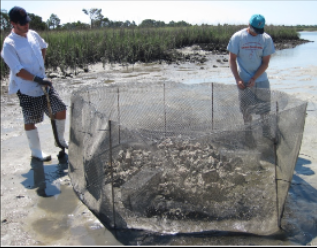 The graphs below summarize their findings. The first thing to notice is that mud crabs were bad news for oysters, as survivorship plummeted when mud crabs were abundant. However, early in the experiment (graphs A and B) having a toadfish around helped out considerably. Oysters survived much better in the presence of toadfish (triangles and dotted curve) than they did without toadfish (circles and solid curve). But by the middle of the experiment (Graphs C and D), the toadfish no longer helped. Interestingly, by the end of the experiment (Graph E) the toadfish was once again helping the oyster’s cause, as survivorship was again greater in the presence of toadfish than in its absence. Realize that the difference between the dotted and solid curve is a measure of the NCE, as the toadfish are not eating the crabs (because they are caged). So we can conclude that there was a strong NCE early on, which waned in the middle of the experiment and then returned by the end of the experiment.

A second finding is that the reef grew (expanded) when there were no crabs present, but that even two crabs were enough to reduce reef growth to zero. In addition sediment organic matter was greatest when there were either none or only two crabs present in the reef. Four or more crabs in the reef reduced the deposition of sediment organic matter. These findings were not influenced by the presence or absence of toadfish.

note: the paper that describes this research is from the journal Ecology. The reference is Kimbro, D. L., Grabowski, J. H., Hughes, A. R., Piehler, M. F., & White, J. W. (2017). Nonconsumptive effects of a predator weaken then rebound over time. Ecology 98(3): 656-667. Thanks to the Ecological Society of America for allowing me to use figures from the paper. Copyright © 2017 by the Ecological Society of America. All rights reserved.